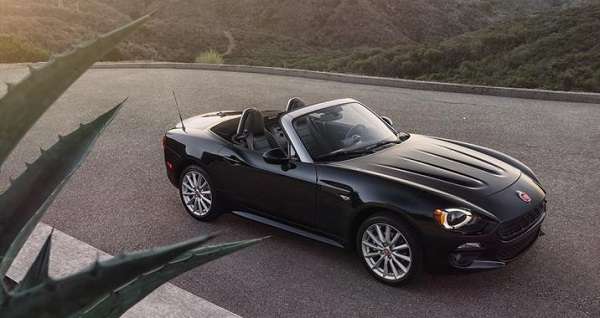 Will the new Fiat 124 Spider sell in big enough numbers to rival the Miata?
Advertisement

With the arrival of the new 2017 Fiat 124 Spider this coming month, the affordable rear-wheel-drive convertible roadster market expands to two offerings. Both are made side by side in Hiroshima Japan and share most of their mechanical bits aside from drivetrains. They are also similarly priced, so the Fiat is not at a financial disadvantage. Both are a blast to drive according to legions of reviewers. Which will sell better in the coming year?

Some credit the Fiat 124 Spider for saving the Miata. We think that is a stretch, but it certainly helped justify an all-new generation (the ND), rather than a drivetrain update and refresh of the styling. Selling basically the same car under more than one brand name works for every automaker as long as that isn’t taken too far (Saturn, Oldsmobile, Pontiac, Mercury, and maybe Lincoln). Our inquiry is mostly for fun, but with the Fiat about to launch, it is worth considering. We honestly don’t know of any arrangement between the two automakers that would limit the Fiat’s sales.

The answer from our vantage point is the Miata will sell better - by far. The cards are stacked against the Fiat for three main reasons. First, the Mazda dealer network is significantly larger than Fiat’s. People do shop locally for new vehicles to some degree, and Mazda has long been established in the U.S. Both are small compared to the Big 3 (Toyota, GM, and Ford), but Mazda is the bigger footprint. (More on Page 2)

Second, the Miata has a huge, loyal following right now. There are multiple Mazda Miata clubs on FB with many thousands of fans. So many that some clubs have had little civil wars and split up into smaller clubs with more focus. The Fiat 124 Spider 2017 Club on FB has just 51 members. I will say, though that it is a great club and its members are not just physically attractive, but also intelligent (Full disclosure - I started that club last year).
- Curious about which is faster? Read This.
Mazda also has a huge racing community in the U.S., and they need cars now and for the future. Racing uses up cars and parts of cars and becomes a self-feeding system over time. Spec Miata and other clubs race Miatas all over the country, and many say it is the most raced car in America.

Fiat reported sales of 1 (one) Fiat Spider in June of this year and the big parking lots full of Spiders will be distributed to dealers by the end of July (and immediately recorded by FCA as a “sale” – click here for more on that). By December the Fiat 124 Spider early adopters will have theirs and by late spring of 2017, we will know if the Spider sells as well as the Miata or better. We’re rooting for both to grow together!

b0nestock wrote on July 20, 2016 - 11:42am Permalink
Credit for having saved the Miata? I disagree. In fact, the MX-5 still looks better in my opinion. Also, it's an exceptionally fun car to drive that continues to sell... I love my NA and plan on purchasing an ND soon (if the dealer can hold onto them!). There's not many comparable choices in this price segment... but I'd still prefer the Mazda over the Fiat.
FreeSC wrote on July 21, 2016 - 6:53am Permalink
Actually, it's not a matter of opinion. Fiat DID save the Miata. I have followed this story for a number of years. When Mazda did a market study, they could not justify the dollars required to develop the new car, and would have let it die (as they did the RX7), if Fiat had not come along and parterned with them. And while most people assume that Fiat came along later and just modified Mazda's design, nothing could be further from the truth. In fact, it was Fiat that decided MAJOR design elements of the car: the weight reduction, long hood, lowered engine location, windshield location and angle. Fiat dictated a lot of design elements because they wanted the car to fit the design profile of the Alfa romeo that the car was originally planned to be.
Paul T wrote on July 20, 2016 - 11:53am Permalink
I would guess that the Miata will sustain it's numbers without a problem. However, being an old Fiat 124 fan, having owned a '72 Spider from new for 6+ years WITH NO PROBLEMS, I have a secret desire for the Spider to do VERY well. And from what I've been gleaning from reports many who try both like the Fiat better including a few who opted for the Miata and are looking to change.
sam wrote on July 20, 2016 - 3:49pm Permalink
I think the Fiat is a far better looking car, but as pointed out the Mazda dealership is more established. I'd probably buy base on price at this point, who wants to give me a deal. Let me go convince my wife on the value of a two seat toy.
AePober wrote on July 20, 2016 - 5:11pm Permalink
(Disclaimer: I'm driving a 2005 Saab 92x which is actually a rebadged Subaru and built in Japan.) Buying a 124 Spider and believing that it's an Italian sports car is just wrong. Yes, Fiat may have had some styling input but the hard points were already set. There may be some differences in package offerings and minor interior differences but I expect to see two versions of the same car. As far as the Fiat saving the Miata- I will say that after owning my Saab/Subaru I'd look happily consider buying a new Subaru.
Dan wrote on July 20, 2016 - 10:45pm Permalink
I just bought a Classica Spider and I love it! I like the Italian design so much more than the ND Miata and I got an employee discount since I retired from Chrysler.
Wayne McKenzie wrote on July 20, 2016 - 11:11pm Permalink
Much more content of the 124 Spider is original (Italian) than the author is admitting. He didn't mention that the 2 cars do not share any body panels, brakes, suspension, is longer, has a bigger trunk, more sound deadening, a more substantial roof, a different exhaust. In my opinion, the Fiat just looks better than the Miata. The performance is similar and quite adequate. While I've always been glad the Miata existed, I've never wanted one. I want the Fiat 124 (Abarth) Spider.
John Goreham wrote on July 21, 2016 - 10:07am Permalink
Thank you Wayne. All valid points. The Fiat is heavier too. Left that out...
Jay wrote on July 24, 2016 - 1:34pm Permalink
There are currently 17 Fiat Spiders sitting on lots within a 50 mile radius of me and EVERY SINGLE ONE is automatic transmission. Sad.
Dan wrote on July 25, 2016 - 11:04am Permalink
I've been told that the next batch is supposed to have some manuals (they are already in ports awaiting release / delivery). No Abarths yet though.
Paul Nguyen wrote on December 3, 2017 - 10:52am Permalink
Just bought 2017 MX5 sport automatic. I tried both cars, the Fiat has Turbo lack ( I don't like turbo lack) and yes, I think it looks better than the MX5, the main reason why I bought my MX5 is I don't like turbo lack. Do not buy 6 sp manuel, fun to drive for a few months and suffer for the rest of your life. Do not watch youtube too much, bc they will ask you to go for 6 sp manuel. I think both cars are very good car, I have a lot of fun w my 2017 MX5.