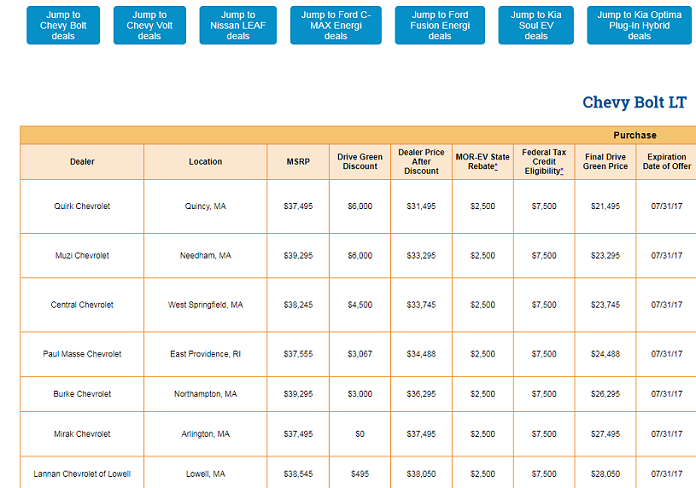 Dealers are heavily discounting the 2017 Chevy Bolt, making it much less expensive than a Tesla Model 3.
Advertisement

Chevy Bolt Price Advertising
One dealer in Massachusetts is advertising (yes Chevy advertises the Bolt) the new 2017 Bolt LT with a $6,000 discount after incentives. That means that the Bolt has a pre-incentive price of just $31,495 before a buyer even begins to negotiate. The dealer, Quirk Chevrolet, in Quincy Mass., shows an after-incentive price of just $21,495 for the Bolt LT. No special terms like special financing are required. Incentives include the $7,500 federal tax deduction and state $2,500 rebate on EVs. The $21,495 Bolt price even includes destination charges.

Chevy Bolt Dealer Discounts
That one dealer is not alone. Six other Mass. dealers and one in nearby Rhode Island are heavily discounting all of the variations of the Bolt, including those with DC Fast Chargers and the loaded Premier trims. The deals are far from secret. They all appear on the Drive Green website set up by the state of Mass. Rhode Island also participates in the program (no Rhode Island car dealer is more than a hour from the Mass. border.)

The deals vary month to month and these we have highlighted are those for this current month of the story's publication, July 2017. At the time of this writing, even the smaller dealerships had significant Bolt inventory.

- Related Story: How To Buy Tesla Model 3 for Only $25,000 in California: Cost Comparison

David Troy wrote on July 31, 2017 - 3:48pm Permalink
Perhaps you should mention that these vehicles do not have DC Fast Charging option, which significantly reduces driver experience, resale value and upfront cost for the car. None of the deals listed here include DCFC.
John Goreham wrote on July 31, 2017 - 4:55pm Permalink
Thanks, David, but Bolts with DC Fast Chargers do also receive the $6K discount in the article. I specifically did mention that in the third paragraph. The image does not show it because the image size is limited to 696 pixels wide. Click the link in the story to the Drive Green Website and you will see that it says, "The Bolt LT with the DC fast charger is available for purchase from Quirk Chevrolet for $6,000 off the MSRP of $39,295 and also includes the Driver Confidence Package and Comfort and Convenience Package."
Eddie Yasi wrote on July 31, 2017 - 6:06pm Permalink
I just picked up my Bolt last Tuesday and it's a wonderful car! I'm very happy with it so far and encourage others to check them out if they're interested in EVs....
John Goreham wrote on July 31, 2017 - 7:32pm Permalink
Thanks for commenting Eddie! May we ask, without being too personal, did you get some form of a discount from the dealer?
Eddie Yasi wrote on August 4, 2017 - 8:45pm Permalink
I got a 5k discount on leasing. I've never paid full price on a new car at a traditional dealership. It's all part of the game and one reason many people fear buying a car. Getting a discount on a car says nothing about it's quality.
John Goreham wrote on August 4, 2017 - 10:47pm Permalink
Thanks again Eddie. That is a deal that is hard to ignore.
Charlotte Omoto wrote on August 4, 2017 - 12:49am Permalink
I wonder why they have to provide such big discounts if they are such great vehicles.
John Goreham wrote on August 4, 2017 - 6:58pm Permalink
An excellent question (or point). Expand that thought to include all EV incentives.