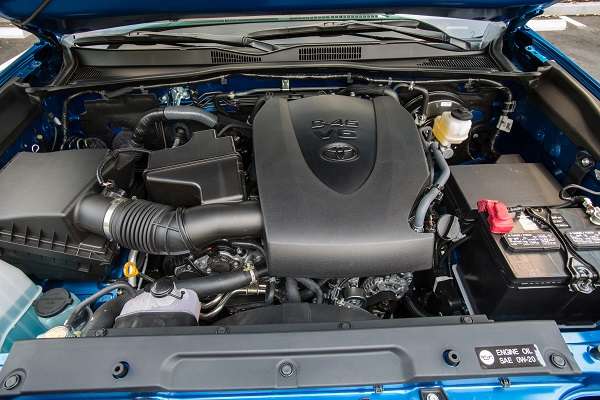 The 2016 Chevy Colorado Diesel and Toyota Tacoma V6 gasoline specifications are in. It’s closer than you think.
Advertisement

Toyota Tacoma New 2016 V6 Towing Rating
Toyota has officially launched the new 2016 Tacoma. New for 2016 is a 3.5-liter, 278 horsepower V6. That is 42 horsepower more than last year. Torque is basically the same at 265 lb-ft compares to 266 lb-ft last year. Toyota’s V6 is the most powerful engine announced by Toyota and will have the highest towing capability with its tow package. Toyota says the 2016 Tacoma can tow 6,800 pounds, three hundred more than last year.
UPDATE: Check out our full review of the Tacoma when hooked up to a 5,000 horse trailer and when hauling a half-ton of feed in the bed.

Chevy Colorado Gas and Diesel Towing Ratings
Chevy has not yet updated the 2016 Colorado’s towing capabilities when coupled to the 3.6-liter 305 hp gas engine with its 269 lb-ft of torque. However, for 2015 it could tow up to 7,000 pounds when equipped with the towing package. The Chevy Duramax 2.8-liter diesel-equipped Colorado for 2016 will tow 7,700 pounds in 2WD form, and 7,600 pounds in 4X4 models. Except in its top-trim ZR2 diesel, which is rated at 5,000 pounds.

The Colorado is the clear winner in the head-to-head towing contest. However, truck buyers towing this near much weight may want to consider a full-size truck. Even basic Silverado 1500s can tow 6,700 pounds, but with optional equipment can tow dramatically more.

However, the maximum tow rating is not the whole story. One wants a feeling of confidence when towing, and the ability to keep pace with traffic. Scott Yackley, the assistant chief engineer on Colorado, made it a point to mention this, saying “…there are no compromises with the Colorado diesel. It offers exceptional capability delivered with a confident feeling of control.” Fuel economy when towing also matters and there is no real specification for fuel economy when under a full load. We will need to wait for reviews by writers that tow to get a sense of that.

Although every manufacturer wants to have the top towing numbers, one way to look at the mid-size market is that both Toyota and Chevy now offer smaller than full-size trucks with pretty impressive towing capability. Each is capable of towing a race car on a trailer, or a pretty substantial ski boat or bass boat. Each can also match the basic towing capabilities of a full-size truck with no special towing options.