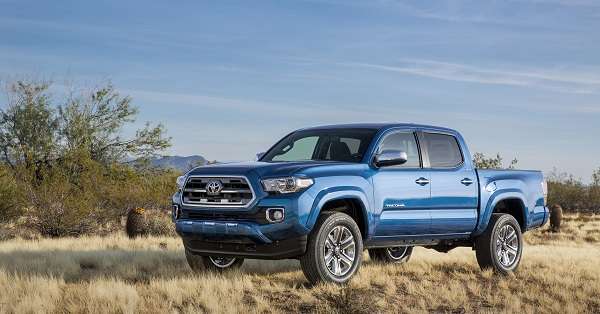 Tacoma sales drop back during the switchover month, yet the Tacoma still beats Chevy and GMC.
Advertisement

In its first month of sales, the 2016 Toyota Tacoma mixed with remaining 2015 Tacoma inventory beat the combined sales of the Chevy Colorado and GMC Canyon. With 11,165 units sold, the Tacoma outpaced the Colorado (7,334) and Canyon (2,332). GM’s mid-size truck sales are leveled off at their full production capacity. Nissan’s Frontier is falling further behind, with sales down 32% over last year at just 4,617 units.

Both GM and Toyota are selling all the mid-size trucks they can build right now. For the past few months, Toyota’s full capacity was at about 16,500 units. However, with the switchover in production from the 2015 to the all-new 2016 model, sales declined slightly due to expected manufacturing issues.

Torque News reached out to Toyota for official comment. Spokesperson Amanda Rice offered, “September Tacoma sales will be slightly lower than what we typically sell, but are still in line with our expectations. Though September was a transition month for Tacoma, with sell down and the beginning of MY16 arriving at dealerships, it continues to enjoy strong consumer demand.”

In recent months Bill Fay, Group Vice President and General Manager – Toyota Division Toyota Motor Sales, U.S.A., has poured accolades upon the Tacoma saying:
-Tacoma is in the tenth year of its model lifecycle and has been the hottest vehicle in our lineup this year, with sales up about 20%.
-The new model is shipping to dealers as we speak, and they are selling as fast as they can get them.
-As is typical with a model changeover, it will take a couple of months to get dealer stocks up to normal levels.
-We have always said that if we could make more trucks, we could sell more trucks.

On top of the third shift Toyota added to boost Tacoma production, the company has also added 275 new employees to its San Antonio, TX plant to help keep up with the incredible demand for the industry’s dominant mid-sized truck.

Related Stories:
How many more Tacomas could Toyota sell if it offered a diesel in the U.S.?
2016 Toyota Tacoma V6 Towing vs. Chevy Colorado Diesel Duramax

mi wrote on October 1, 2015 - 4:08pm Permalink
Selling all their production. Ford sure looks stupid now. And Gm twins are pulling F150 owner in.
Sarah Collins wrote on October 21, 2015 - 2:24am Permalink
Good going Toyota motors. now it is proved that Toyota is doing masterpiece work and creating revolution in the auto industry. good news that it it proved wrong the speculation of other auto manufacturers.