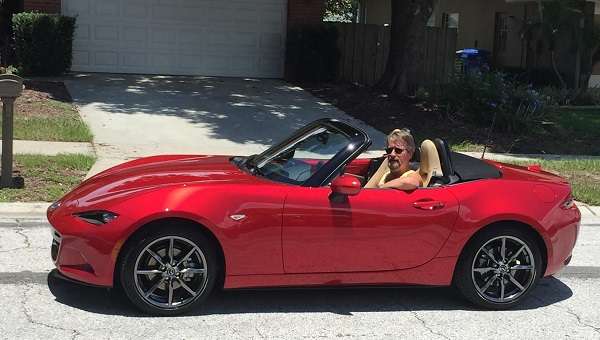 LeRoy Dennison is one of the lucky few that pre-ordered a Launch Edition Miata. Here's what he thinks of the car after about 2,000 miles.
Advertisement

LeRoy Dennison read and responded to a recent Torque News story. The owner of a 2016 Launch Edition Miata, we asked LeRoy if he would tell us how he likes the new car now that he has 1,900 miles on it. LeRoy takes us through his ownership experience from ordering till his current 1,900 mile mark. He confirms our hopes for the new Miata and busts one myth.

By LeRoy Dennison:
My youngest brother has been buying, fixing up, and selling Miatas for years, which is how I got interested in them. Both of my brothers live in the mountains of North Georgia where roads are made for a Miata. Like a lot of people, I had been following the status of the 2016 Miata since it was first announced. When I read about the Launch Edition on longlivetheroadseter.us, I decided I wanted to own one of the 1,000 that would be made. What’s not to love about a Soul Red 2016 Miata GT model with tan leather seats. The day that Mazda began taking deposits on the Launch Editions, May 5th, I ordered one. The only choice to be made was an automatic or a standard transmission. Of course, I picked the standard.

Waiting for this to arrive at the dealership (Ferman Mazda of Tampa) was maddening because I could not get any information on the status of the vehicle until just before it was to be delivered. Neither could the General Sales Manager, Bill Bates, nor the Internet Sales Manager, Braxton Simmons. Both of them were great, however, in that they did find out the VIN of the one headed slowly towards me, and they confirmed when mine was on the ship, and when it was loaded up on a truck on the west coast en route to Tampa. Most importantly, they did not play any games with me on marking up the price, nor did they hand me off to one of their sales people to handle the paperwork. My transaction was handled completely by the managers.

The photo accompanying this article is when I arrived home after picking my car up at the dealership on July 20th. As I write this, I have had the car a little over three months and have just over 1,900 miles on it. Why so few? I work fulltime and I have some hobbies that take up a lot of my time on the weekends, plus you might have heard about the three-week period during which the Tampa Bay area received record rainfall pretty much each and every day. That began on July 21st… What’s the point of having a convertible if you have to drive with the top up and the wipers on.

The hardest thing for me was to wait until I had 700 miles on the engine before redlining it. For those who think that the ND is underpowered, I have one thing to say. Drive one and you will discover that you are wrong. It doesn’t take a lot of power to move 2,300 pounds of car down the road. Once I got it broken in, I have not been driving it easy. Nevertheless, my total average MPG since I drove it off the lot is 34.0. Highway mileage at 75 MPH is 40+.

What do I love about it? Pretty much everything. I looks super nice. The shifter is quite possibly the best 6-speed available (short stick, really short throws) and the close-ratio transmission is a pleasure, whether taking it easy or not. The built-in hill assist is cool. Not that we have many hills around Tampa, but if you are stopped on an incline (whether the nose is pointing up or down), if you start to slowly let the clutch out before you remove your foot from the brake, it automatically holds the brake until the clutch begins to engage. Then there’s the thrill of turning off the electronic stability control and aggressively taking corners. We do have some changes in elevation and curvy roads near where I live southeast of Tampa, in Riverview, mostly following creeks or rivers. With these being ‘in the country,’ I am not too concerned with getting a ticket for reckless driving. I don’t have any problem remaining on my side of the road because it handles curves while under heavy braking or hard acceleration like a slot car, plus my radar detector is good about letting me know when I need to settle down. Although the engine is pretty quit at idle, it sounds very nice under acceleration. With the top up (which takes just a couple of seconds to deploy), it sounds even better. No noise piped through the sound system like some other sports cars, just good sounds coming through the firewall and from the exhaust. Then there is the Bose sound system, complete with speakers in the headrests of the seats. It sounds very nice, even at highway speeds with the top and windows down. Bluetooth calls are routed to the driver’s seat speakers only.

Do I have any gripes about the car? Yes, but they are minor. The location of the a/c adapter for plugging in a radar detector is in the foot well on the passenger side, and I mean all the way in it along the firewall. In order to plug in my radar detector (an Escort Passport, by the way) and still be able to press the silent button on it, I had to get an extender to plug into the outlet so that the radar detector’s power cord and ‘be quiet’ button can live on the console just forward of the shifter. Nit #2 is that the seats have a little bit too much bolstering curvature on the upper part of the backs for my body (I am 6’ 1” tall and 200 lbs) resulting in my shoulders having to curl forward just a little. My only other nit is that there is no spare, not even an emergency donut. However, the Bridgestone 205/45R17 84W Potenza S001 that came on it are fantastic tires, but I wish it came with the Potenza S001 RFTs.

Wray Gillette wrote on October 26, 2015 - 11:19am Permalink
Great article LeRoy.... Just remember the 'red sports cars' are a favorite for police radar guns.. Glad you have a radar detector....of course I know we never speed, just like to be informed... I have been down here for 17 years now and my hardtop has not left the closet it is stored in... I have had to put the convertible top up, but only when caught in the rain... can't help that here in FL.. Enjoy your Launch Edition... she is a beauty.
CHUCK CLARK wrote on October 28, 2015 - 5:55pm Permalink
nice ride Leroy, got to love a true sports car. two seats and top down.
Rachel Sharwell wrote on May 5, 2021 - 6:34pm Permalink
Great article. I’m thinking of buying one site on scene out of state. It’s the 2016 read launch edition just like yours. 15,000 miles on it. Pretty excited.