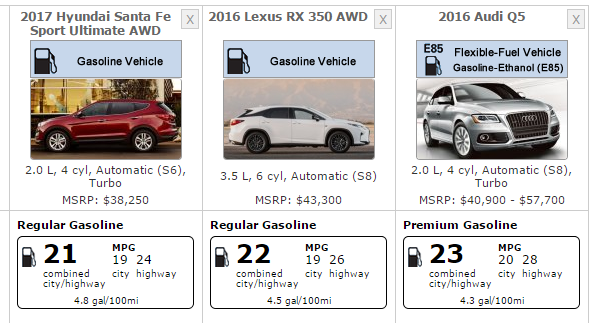 Are small turbocharged engines all they are cracked up to be or is it just a myth?
Advertisement

Auto manufacturers are turning to smaller, turbocharged engines en masse to squeeze out fractions of an MPG in their vehicle fleets. The story goes that smaller, modern four-cylinder turbocharged engines can match the power and fuel economy of the V6 engines they replace. While certainly true in the case of older V6 engines, those that are up to date, like the 2016 Lexus RX 350’s V6 engine, are more powerful and more fuel economical than smaller turbos. Here is a comparison.

To their credit, both the Lexus RX 350 and Hyundai Santa Fe Sport Ultimate use Regular unleaded gasoline and that is how the EPA rated them for mileage and power. Many crossovers with 2.0-liter turbocharged engines, such as the 220 hp Audi Q5, instead specify much more expensive Premium fuel. Using today’s AAA average prices, Regular fuel is priced at $2.36 and Premium at $2.84. That is a whopping 17% difference in fuel costs. The results are that the RX 350 has an annual fuel cost of just $1,600 compared to the Santa Fe Sport Ultimate’s $1,700, and the Audi Q5’s $1,850. (More on Page 2)

The V6-equipped, and much more powerful Lexus RX 350, tops its 2.0-liter turbocharged rivals in both power and fuel cost per mile, despite being the largest vehicle in the grouping.

Jesse wrote on June 18, 2016 - 9:16am Permalink
Several issues are at play here. Sure the car sticker makes your point. But let's look at the real world realities. In reality, a difference of a mile or two per gallon isn't a deal breaker....unless one is looking for the best mpg, car be damned. During this period of cheaper gasoline, mpg plays even less of a reality....just look at the economy cars sitting on dealer lots.....and....hot selling pickup trucks which the manufacturers can't make enough of.....restricted by factory capacity. And the CVT transmissions in cars now get mixed reviews. The only reason they are in cars now is for increased mpg....that's it. So why is everyone focused on mpg? Government regulations. This is not an anti-government rant. As a kid, I remember the only emission device on my '66 Chevrolet 396 V-8 was a pcv valve located in the valve cover. So as emission and mpg requirements increase, so does the manufacturers' looking for ways to meet those requirements. CVT transmissions and the increased use of lightweight materials are only two responses by automakers. And back in the mid-70's GM downsized their whole lineup as a result of the first oil embargo. Just compare the '76 and '77 Impala size wise. To sum up my comments, the mpg is influenced by perceived customer wants and government requirements as well as the price of a gallon of gas.