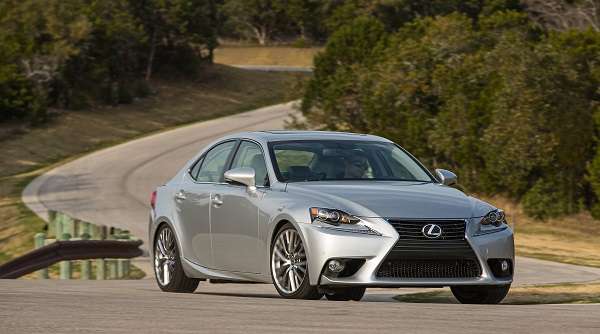 The Lexus IS 200t will strike the perfect balance

In the next year or two Lexus will finally give the Lexus IS sedan a great base engine. Here's why we think it will also be the best overall car in the IS lineup.
Advertisement

In the coming year Lexus will transplant its new 2.0 liter turbocharged engine into the IS, calling the model the IS 200t. The woefully underpowered IS 250 will be discontinued and the new base engine in the IS will be the smaller, but dramatically more potent turbocharged engine. We suspect strongly that this new configuration will be the best of the IS line overall. We don’t say this lightly. It should be noted that the author owns (and cherishes) a current generation IS 350C.

Lexus' New 2.0 Liter Turbo Engine
The new 2.0 liter turbocharged engine in the 2015 or 2016 Lexus IS 200t will produce about 240 horsepower and about 260 lb-ft of torque. These are rounded-up numbers we estimate from the published Lexus NX 200t engine specifications. We plan to drive the new NX in July and will report on the engine shortly after. As an owner of the current IS 350C with 306 horsepower, and having tested the IS 250 in a few different versions, both on track and on public roads, it is clear to me that the “250” is too weak by far. It is also clear that the “350” is more than most people actually need in a car of this type. I have also driven the IS F back-to back with the IS 350 and frankly, on public roads the IS-F’s V8 engine does not make much more usable power than the 306 horsepower V6 does in the IS 350.

Would an IS 200t Be Fast?
That is a lot of specification talk in one bite. What I mean to convey is that on public roads, the IS 200t will have more than enough torque to pull strongly from a standing start, and also enough power to accelerate briskly while already travelling on the highway. My guestimate of the 0-60 time of the IS 200t would be about 6.5 seconds, possibly 6 seconds flat if the gearing is changed to suit the engine. Multiple automotive publications have pegged the IS 350 in the mid-5-second times. Although the 2.0 liter turbo will have less power, it will have almost the same torque as the IS 350.

Dump the All-Wheel-Drive
Another critical factor is the driven wheels of the perfect IS sedan. The rear wheels should drive this sports sedan. In this author’s opinion the addition of all-wheel drive (AWD) is a mistake on Lexus’ part. Here in the Northeast where I live it is very difficult to find a car with rear wheel drive. It is one reason I bought the IS 350 C coupe-convertible.

All-wheel drive has its advantages and offering it as an option in the snow-belt makes sense. It will propel the car forward at full speed in the rain. It will help the car to move forward in the snow. All the other advantages that Lexus and other automakers claim about handling and safety are complete falsehoods in my opinion. Remember, I am not saying this as an opinion I made up. I have driven all forms of the current generation IS on both autocross (short race tracks) and also on the track at the Monticello Motor Club. AWD in a sports sedan at this price point is strictly a way to move the car forward in bad weather. It will not help a driver turn an IS on a public road and it has no safety advantages.

All-wheel drive does slow the car. It adds weight. It also reduces fuel economy. The worst part of the AWD system in the Lexus IS is that it adds a very large bulge to the driver’s footwell near the top of the driver’s right leg. Many people complain about this, and it is not insignificant. Those short of stature (women) notice it less because the seat is moved forward and that minimizes the intrusion on their legroom.

Lexus IS 200t Brakes and Transmission
While we are on the subject of the IS 200t, and what it should and should not have, let’s hope Lexus adds the same brakes that the IS 350 enjoys to the IS 200t. Currently, the IS 250 has smaller brakes. It makes a dramatic difference in brake feel. With regard to the 6 speed versus the 8 speed automatic transmission, it makes no difference in this writer’s opinion. The 8 speed adds a little bit of fuel economy, but if it costs more, that advantage may be negated. On the flip side, the 8 speed seems to be always in too high a gear, requiring more downshifts when one stands on the gas to accelerate. Both work well with the paddle shifters, and both currently match revs on downshifts. We hesitate to ask any more of Lexus, but if the six speed manual could return to the IS it might just make the dreams of a lot of Lexus sports sedan fans come true.

The 2015 or 2106 Lexus IS 200t with rear-wheel drive will be a very special sports sedan. In the opinion of this writer, who owns a more powerful version, it could even be the best overall Lexus IS.

Related Stories:
The turbocharged 2015 Lexus IS 200t will hit BMW 328i where it hurts
Lexus IS outscores rivals on IIHS Front Crash Prevention test
2014 Lexus IS 350 beats BMW 335i in comparison test - again

MrT wrote on June 25, 2014 - 2:48am Permalink
Ever drove a IS300h? I own it since a year and still love every ride with it.
John Goreham wrote on June 25, 2014 - 9:36am Permalink
I have not. I have driven the ES 300h. Can you please tell us what your mileage is?
MrT wrote on June 25, 2014 - 12:54pm Permalink
40.0 MPG over a distance of a little more than 6'000 miles. Surprisingly, this is not much worse than the CT200h I owned before, but the car is much better, especially power, steering and ride comfort. I also prefer the rear wheel drive. Steering feel is best in sport mode.
John Goreham wrote on June 25, 2014 - 5:44pm Permalink
That is impressive! Not to be overly specific, but those are US gallons, right? 40 MPG in UK gallons is not the same. Thanks for your post!
boe wrote on July 18, 2014 - 10:24pm Permalink
I hope they release a turbo hybrid IS in the United States VERY SOON!
Bob Rae wrote on July 7, 2015 - 5:17pm Permalink
Many markets do well with awd, even though it may not be as "sporty" Where I live in Canada, we see snow covered roads and slippery side streets for 6 months of the year. The 200t as you call it (the name hasn't been confirmed yet) will be a great base engine, but not available on the awd car. That model (IS 250 AWD) I'm told will get a detuned 3.5L V6 out of the IS350, producing around 250HP. That will give the car the boost it needs to compete with other entry level cars in its class.