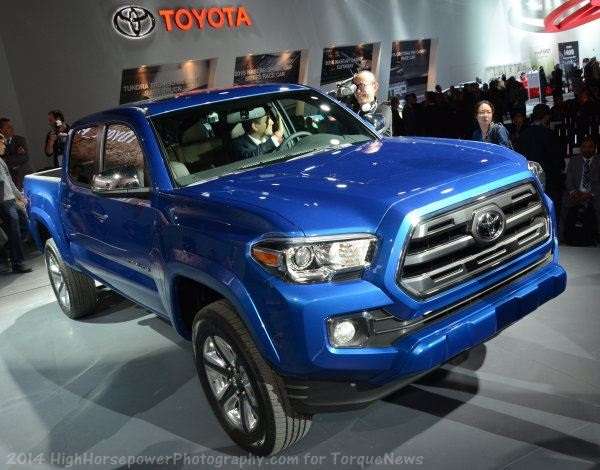 Does one truck need to steal the other’s market share? Maybe not.
Advertisement

The 2015 Chevrolet Colorado came out of the gate an award-winning pickup truck. Chevrolet did a great job with the all-new design and has injected life into a segment that many automakers (Ford and Ram) had written off as dead. Chevrolet re-enters this segment that Toyota’s Tacoma has dominated for a decade. Most stories, including many here at Torque News, cast the situation as win-lose. However, another possibility is that both trucks thrive, customers flock to dealers over the next 24 months, and the segment grows by leaps and bounds allowing both trucks to meet their individual goals.

2015 Tacoma Sales Growing
The 2015 Toyota Tacoma is not the new design released just this week. It is very much the same truck that Toyota has been marketing for many years, and basically unchanged. Yet, with the Colorado launching few months ago, and now having had two full months of sales, the Tacoma is growing. And not just a little. In December, the Tacoma’s sales were up 12% on a volume basis to 14,284 units. In November, the Tacoma sales rose 3.3 percent. Evidently, the Chevrolet Colorado has not yet hurt the Tacoma’s sales.

Chevrolet Colorado Sales Curve
The 2015 Colorado logged just 2,366 sales in November with its twin the Canyon selling about 850 units. That was entirely due to limited volume according to our analysis. In December, the Colorado jumped up to 4,037 trucks and the Canyon added 1500 more. Without doing any hard math, it is easy to see that at least temporarily the mid-size pickup truck market has started to expand significantly. Will this trend continue? Both Toyota and Chevrolet think so.

Chevy and Toyota Add Capacity
We reached out to Chevrolet and asked if the Colorado’s sales in December would have been higher had more trucks been on dealer lots. Indeed, the answer was yes, and our contact pointed out that the turn rate, or how quickly a truck moves onto and off a dealer lot was very fast. More importantly, the rate of sales was increasing through the month. He went on to say that the “pipeline” not a lack of customers is the real reason the Colorado has not sold at a much higher pace. Chevrolet is addressing this. Later this month a third shift is being added to add capacity.

Although Toyota’s current generation, 2015 Tacomas are selling well, Toyota is planning for an increase in sales when the new 2016 design enters the market mid-year. Toyota has also added capacity. In fact, the press release announcing this factory expansion was our first firm indicator that the 2016 was to be a new generation.

The only other automaker in this segment right now is Nissan. Its Frontier has also been growing steadily month to month, and that truck is now on a 6,000 unit per month pace and is up about 18 percent over the past year. Honda's Ridgeline has been taken off the market for 2015, but is planning a 2016 return.

Mid-Size is Right-Size
The full-size truck market is by far the largest segment in all of the auto industry. However, the basic full-size pickup truck is only part of that large group. Heavy duty and super heavy duty trucks add to the one large number automakers report monthly. Mid-size trucks are now larger than ever before and for many buyers they are enough, or more than enough, to meet their needs. As the full-size market continues to vie for fuel economy numbers it, will only highlight the benefits - to some – that a smaller than full-size truck offers.

Conclusion
Every truck enthusiast loves to read about how their truck is “beating the competition.” While there is often an element of truth in that, another possibility is that this important segment may be poised to grow not just enough to accommodate the new GM trucks, but also enough for the Tacoma and possibly the Frontier to continue to add sales.