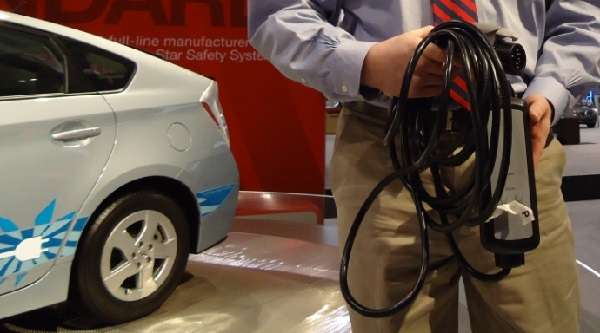 Toyota held off on introducing the Prius Plug-in until the regulatory rules and tax incentive programs were in place. Since its introduction its sales have been steady, just like most electric models.
Advertisement

One of the most interesting things I saw at the 2010 Boston Auto Show was Toyota's Plug-in Prius. At that time the internet and forums were abuzz with people clamoring for plug-in hybrids. Then Toyota did not introduce the car. For some reason it waited another 14 months. Finally it did launch the car and in April and November of 2012 more green car buyers chose the Toyota Prius Plug-in than any other electrified car. It happened again in October 2013 (this past year). On those three months the Prius outsold all the electric cars on the US market. Not combined, just on a direct one on one comparison basis. For the past twenty months the Prius Plug-in sold an average of 1,000 units per month. Mostly in California and other target markets where zero emission vehicles are mandated by state law or regulation. That makes it the fourth leading seller behind the Volt, Leaf, and Tesla Model S, which all have a run-rate of about 1,900 units per month in the US. The Prius Plug-in outsells the next competitor by almost a 2-to 1 ratio. That car is the Ford C-Max Energi.

This relatively flat growth curve for each model of EV and plug-in makes us wonder if the automakers are purposely holding down the availability of these vehicles (Tesla excluded) in order to only sell what they need to in order meet their regulatory obligations. That is not an original thought on our part. EV advocates have been saying this for some time. We exclude Tesla because by all measures the demand for the Model S is far outpacing the current production volume of this new automaker. We have no doubt that Tesla could easily sell many more Model S cars if it could make them. Indeed, we suspect it will do just that in 2014. The other automakers have no excuse. Toyota, GM, and Nissan can make as many EVs as they decide to.

What makes green car buyers choose the 2014 Prius Plug-in? Without re-writing the car’s sales pamphlet we will repeat exactly what Toyota says of the car. It is “the hybrid you love, now with a plug.” The upside of the Plug-in is that one can travel about 11 miles (according to Toyota) on electric power alone if fully charged. When that runs out, or if you drive onto the highway, it will simply turn back into a 50 MPG Prius, which is by far the leading selling green car on Earth. A lot of people must like something about the regular Prius models. It sold 222,000 of them last year.

There are other advantages too. Like an EV, the Plug-in Prius can pre-condition its cabin, and in some places you can get a high occupancy lane sticker for it. Also like an EV your neighbors are going to help you pay for it. There is a $2,500 federal tax credit (compared to the $7,500 for a full EV) and in California the state will give you $1,500 more. So there is $4,000 available to help offset a cash purchase or lease. According to California’s green car buying guide the 2014 Prius Plug-in will cost you $25,990. The 2013 model was more expensive. Still, that is more than twice what a Nissan Leaf will cost a buyer in California. So why would a green car buyer choose the Prius Plug-in over a Nissan Leaf? All indications point to the reason being that the Prius Plug-in never runs out of range. It can be fueled up in under 5 minutes at any corner gas station and then drive like any other Prius for hundreds of miles. Or it can be driven 11 miles on full electric and then recharged.

There is another advantage of the Prius Plug-in. It can charge at home on a dedicated 115 volt, 15 amp circuit. In fact, it only takes 3 hours to top off using that power source. Other “full” electrics require more powerful and sometimes, more elaborate charging set-ups. Charging has been quite the hot topic lately. Of course, full electrics can store more electricity and travel much farther.

Lately our news feed on Facebook has included a lot of cost comparisons showing EVs to be lower in cost to operate compared to ICE vehicles in the winter. Interestingly, they never add a third category and include the Plug-in Prius or other new hybrids. Maybe the math isn’t so favorable?

Photo by the author shows a Toyota Representative holding the charger for a Prius Plug-in in 2010.