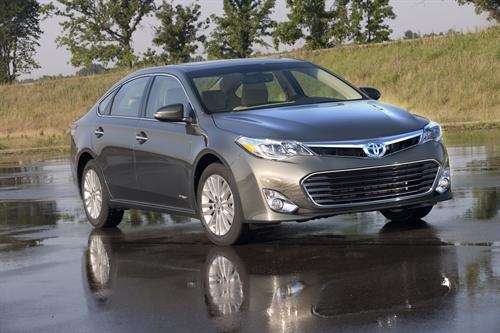 In what may come as a surprise to many, a full sized, gasoline powered car wins a Green Car Award.
Advertisement

In a surprise win, the Toyota Avalon Hybrid took home the “Best Green Car” of the Atlanta International Auto Show today. Although it might seem unusual for a full size gasoline powered car to win a Green Car Award, the automotive journalists that selected the Avalon had their reasons.

The Avalon is a full size, large, 5 passenger vehicle. Using a four-cylinder engine that uses most of the hybrid techniques to squeeze as much efficiency as possible from the drivetrain, such as using the Atkinson cycle rather than the Otto cycle, the car is able to achieve surprisingly good real-life mileage. Although this writer has not tested the Avalon Hybrid, we have tested the Lexus version of this platform and drivetrain in the Lexus ES300h. Our review of that car was overwhelmingly positive and we consider it the first entry level luxury hybrid to achieve drivability equal to that of other non-hybrid cars in its segment. A person driving this car hardly realizes the engine is a hybrid, if they do at all.

Still, choosing a full sized car that primarily propels itself with a gasoline engine may seem suspect at first given that there are full EV and plug-in hybrids on display throughout the show. True, the 40 mpg combined EPA estimated fuel economy is not as high as other vehicles available, but the Avalon has two things that those other vehicles don’t have. Sales numbers and size. The Avalon’s 40 mpg rating beats nearly every compact car available in the marketplace. It also uses regular unleaded which reduces the owner’s fuel costs by roughly ten percent over a vehicle that uses premium unleaded fuel.

Toyota’s hybrids also sell amazingly well. Although the Avalon’s hybrid sales have not yet been broken out by Toyota, in general the various hybrid versions of the Toyota and Lexus vehicles sell in the tens of thousands per year. For example, the Lexus CT hybrid with 17,673 delivered to customers in 2012 nearly outsold the Nissan Leaf by 2 to 1. Yet one rarely hears news about the Lexus CT. The Toyota Prius absolutely crushes the sales charts of all other green cars. In fact, the total fuel saved by Toyota’s hybrids far outweighs the fuel saved by all of the electric vehicles in the marketplace.

It may seem a surprise that the “Best Green Car” award went to a large vehicle with a gasoline engine, but upon closer inspection it is not that unusual.

John Goreham wrote on March 19, 2013 - 8:30pm Permalink
Wow. I thought the EV fans would weigh in on this one. Anybody?
Jackie wrote on March 28, 2013 - 1:24pm Permalink
I brought the Toyota Avalon Hybrid about a month ago and I immediately noticed a decrease to fill-up this car each week! I live close to Fredericksburg Va and I commute to DC each day. Over the years, I brought a variety of different commuter cars. A couple for looks but mostly for gas mileage and now I have both :-) The Avalon is the first hybrid I even considered buying because hybrid cars are not that attactive (yes, I'm a woman). Now, I'm enjoying the savings and style. Great job..Toyota!