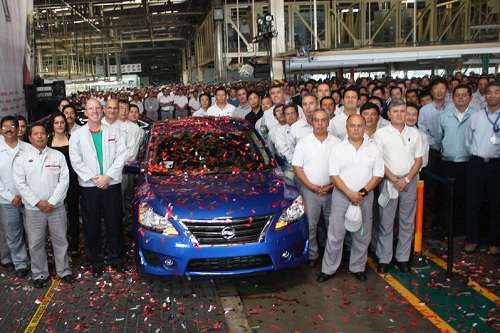 2013 Nissan Sentra rolls off the new line in Mexico

Nissan, like other manufacturers, continues to invest in Mexico. The new Sentra is its latest vehicle to roll off a new line there.
Advertisement

The 2013 Nissan Sentra began rolling off the lines this week in Aguascalientes, Mexico. If you have not heard of Aguascalientes, just think of Detroit - but in Mexico. If you have not seen the new 2013 Nissan Sentra, just think Maxima, but smaller. German and Asian manufacturers, as well as Ford, have been putting more and more resources into Mexico. Most recently, Nissan invested $2 billion (with a B). In order to prepare this specific plant for the new Sentra, Nissan invested over $150 million dollars. Sentras have been being built in Mexico now for 20 years. The new Sentra will be built here and exported to over 20 countries.

Nissan could have established its manufacturing in Detroit, Tennessee, Ohio, or any other auto manufacturing hub in the US and exported its vehicles for the Mexican market without added export duties under the North American Free Trade Agreement. However, after weighing all of the costs related to auto unions in the US, local taxes, federal taxes on profits, benefits costs, state and federal reporting costs, it, like many manufacturers opted not to. Bill Krueger, vice-chairman of Nissan Americas, commented in a press release saying "The 2013 Sentra is a key component of Nissan's continued efforts to introduce innovative vehicles in each segment. The Aguascalientes manufacturing team earned the responsibility of producing the next-generation Sentra through a long-standing record of productivity, quality and efficiency."

The new 2013 Nissan Sentra is stylish, pushed the bounds of its class in terms of size, and can be outfitted with amenities that just a decade ago would have been expected only as options in the top luxury cars in the world. Sentra is the smallest of the three siblings at Nissan that share much of their styling. Maxima, Altima and Sentra all have a striking similarity in terms of appearance. The Sentra is now as big as the first generation Altima, and close in size to the first Maximas sold in the US back in the 1980s.

Nissan has high expectations for the Sentra and has doubled down on its commitment to produce cars in, or near, the markets they will be sold into whenever it is cost effective.

Video Courtesy of Youtube.com and NissanNewsroom

Tesla Contemplates A New Strategy for China Retail even As Sales Boom
Jay Leno on Elon Musk & EVs: “I Think He Should Get ... Credit"
END_OF_DOCUMENT_TOKEN_TO_BE_REPLACED