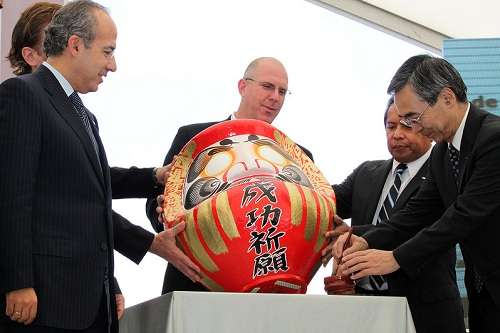 Nissan doubles down on its Aguascalientes complex in a bi-cultural ceremony attended by country’s President and other dignitaries.
Advertisement

Massive New Nissan Facility
Nissan kicked off construction of a massive new automotive manufacturing with a first stone laying ceremony that drew from both the Japanese and Mexican cultures. Nissan is enjoying strong demand for its vehicles in Mexico and in the international market and is investing over $2billion here to satisfy that demand in the future. The new facility once built will not merely assemble vehicles, or create parts. On the contrary, this is a complete complex that includes not only those aspects of automobile manufacturing, but also final painting, and even a supplier park and proving grounds. Armando Ávila, vice president of Manufacturing at Nissan Mexicana commented to the press saying "The magnitude of Nissan's commitment to this new automotive complex is without par. With this investment, we will be able to increase our manufacturing capacity from over 600,000 units per year, to more than 800,000 units by the close of 2013, continuing our record setting production rates in Mexico. And this is only Phase 1."

A Blend of Traditions
If any culture can rival the Japanese for a kick-off party it may be the Mexican culture. Many of the festivities are known to us here in America. For example, a Japanese children’s chorus and the traditional Mexican dancers and singers would not seem unusual. Nor would the creation of time capsule seem out of place. However, how many new buildings surround the laying of the first stone with a photo of very single employee (remember there are thousands) with a description of the contribution they make to the Nissan team? Most interesting was the Japanese tradition of the Daruma (photo). A figurine without arms or legs is placed at the site and upon the start of the project the right eye of the figure is darkened to establish the goal of finishing on time. Once that is reached the other eye will be painted. Speaking to the attendees, which included Mexican President Felipe Calderon, Hidetoshi Imazu, executive vice president of Manufacturing at Nissan said "What encourages me… is how you are working here with 'kokoro,' or spirit in Japanese. I think those who are working here in Aguascalientes have 'kokoro,' in your care for customer needs, 'kokoro' to improve yourselves to achieve higher levels of skills and technology and skills, and 'kokoro' to challenge difficult issues head-on. I hope this spirit will be handed down to the new employees being hired for the new plant so that it becomes of the top-performing plants in the Nissan world, like the current Aguascalientes and Cuernavaca plants."

Nissan Mexico
Nissan celebrated its 50th anniversary in Mexico in 2011. This long history in the country has led to Nissan having the country’s highest share of the domestic market with over 25% of vehicles being Nissans. In 2011 over 600,000 vehicles were produced in Mexico by Nissan and two thirds of those left Mexico headed to over 100 different countries. Nissan’s first automotive manufacturing facility outside Japan was in Mexico. Since that first plant was established back in 1961 Nissan has had a commitment to the local community. Just in the past 11 years a foundation supported by Nissan has built 65 schools that serve over 31,000 children.

In 2012 so far Nissan is enjoying an 18% increase in business over the same period a year prior. That solid growth might in part be attributed to its longstanding dedication to the market it entered five decades ago.