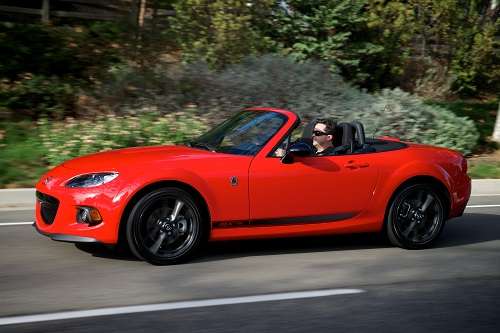 2013 Mazda MX-5 Miata Club has value where it counts

Mazda reconfigured the trims for the MX-5 Miata and it now offers all the go fast bits for much less money in the new Club trim.
Advertisement

For 2013 Mazda has shuffled its MX-5 Miata trim levels introducing the Club trim. The MX-5 Miata Club has all of the go fast bits that a factory Miata can come equipped with and none of the items that come with any additional cost. In the past, in order to get the go-fast goodies a buyer had to include “luxury” items he or she may not want. That pushed the best handling and best performing MX-5 Miata’s price to over $30,000

Mazda MX-5 Miata Trim Levels
Mazda has built the Miata in its current form since the 2006 and a half model year. For the nearly seven years this current, third generation car has been on the market it has been offered basically two ways. For those looking for a bare-bones Miata with no regard for performance, there has always been a car. That car has been priced at about $23,000 or so. It comes with a five speed transmission, cloth seats, and smaller wheels. It is a fine automobile and for sure the best value in the Miata line. For weekend cruises at the speed limit, this car will bring miles of smiles.

Mazda has also always built a car with all the go fast bits and all the luxury items combined. This car was usually called the “Grand Touring.” This car would come with leather, keyless entry, Homelink garage door opener, heated seats, leather wrapped steering wheel and shift knob, Bose audio, and even automatic climate control on newer models. These are all important to a lot of buyers. However, some budget sports convertible seekers really just want the sporting elements. In order to get the important hardware for spirited driving one had to pay for these, running up the price tag.

What Enthusiast Want In a Mazda MX-5 Miata
First and foremost, the Miata buyer with spirited driving in mind wants the best suspension and the best drivetrain possible in a Miata. For that reason, the Club comes with the optional sport-tuned suspension with Bilstein shocks. Importantly, the Club also has the limited slip (rear) differential. The Mazda MX-5 has only 167 horsepower, however, it is difficult to put all of that down, particularly in the wet, or when turning. The limited slip Diff. is needed. Similarly, the earlier cars didn’t have traction control and stability control. That feature is now included in the club package (it still can be turned off too).

MX-5 Club Exclusive Features
The larger diameter wheels are included in the Club as well, but the 17 inch alloys come with a dark finish that gives the car a tough look. Tough is a word that is not often used in describing the Miata, so take it lightly. Some aero bits are added to the Club to help differentiate the look. The rollover loops behind the seats also gets this treatment and it looks great on the car. Finishing the look is a body side trim piece and blackened mirrors.

All Miatas are fun, but Mazda has now offered buyers a choice. They can still get all the limited luxury features if they choose, but the Club offers them the enthusiast gear at about $27,500 without the burden of the higher cost the luxury items would add.

Tre Deuce wrote on January 29, 2013 - 12:03pm Permalink
The 'Club' is a good move by Mazda, but will the dealers order them for Stock? The 'Club' is also available in the Retractable Hardtop. Kinda of defeats the purpose, but might help sell a few more. Probably at least one... to me While not exactly a bargain at near $27,000 especially with the FRS/BRZ and Gen Coupe Turbo, as a RWD roadster, it is the only game in town. The real bargain is any old MX-5 starting around $2,000. And as somebody who has put nearly 300,000 miles in MX-5's, you just can't buy more fun for the money.
John Goreham wrote on January 29, 2013 - 2:38pm Permalink
I still mourn for the 2007 I traded in two years ago for $14K. The car had never seen rain. I let someone drive it that I shouldn't have, and the synchros were damaged so it was starting to click when shifted. It was still under warranty when I let it go, but I had no good dealers in my immediate area I trusted to fix that issue. My buddy owns a Mazdaspeed Miata from the second generation with the turbo. If he ever decides to sell I may have to jump. It will be good fun to see how the Miata and Toyabaru twins do in comparisons when the Subyotas finally come in a drop top. This really is the golden age of motoring. Thanks again for reading and writing in.
Tre Deuce wrote on January 29, 2013 - 3:04pm Permalink
'Mourn' ... Yes, John, can't imagine living without one or three. Pick up that Mazda Speed Miata. You can't go wrong with that model, and it still has the classic original engine. Regards
Tre Deuce wrote on January 29, 2013 - 2:58pm Permalink
The 'Club' soft top is the intended sport/performance model of the two available Club models. The soft top doesn't have the equipment the two 'Club' hardtops do. No radio or air, either. The base model 'Club' hardtop has the following additional equipment... Halogen/projectors _ Air _ Power windows _ Trip computer _ Cruise control _ AM/FM/CD/MP3 _ Leather wheel. It all adds weight in addition to the retractable roof weight of around 80 pounds. Dealers will most likely order this model Club of the Hdtp edition. Especially since it only adds about $1,700 to the soft top price. Pick one up at the end of the model year for a substantially reduced price. The Grand Touring 'Club' Hdtp for about $32,000 has these additional/in place of, features and equipment...> Automatic climate control Leather-trimmed seats Heated seats with 5-level variable heat settings Leather-wrapped parking brake Auto-dimming rear view mirror with Homelink® Synthetic leather-trimmed door panel trim with silver accents Dark gray decoration panel Bose® audio system with AudioPilot® So the new 'Club', except for the soft top model, is a new _edgier _ marketing ploy by Mazda.
Nicolas Zart wrote on January 29, 2013 - 7:43pm Permalink
Finally, performance without the bloat. Maybe this is good news for the shared Alfa Romeo Spider platform. I've always wondered why performance comes with such a weight penalty these days. This is a good move on Mazda's part, especially those of us eying the Alfa Romeo with great attention.