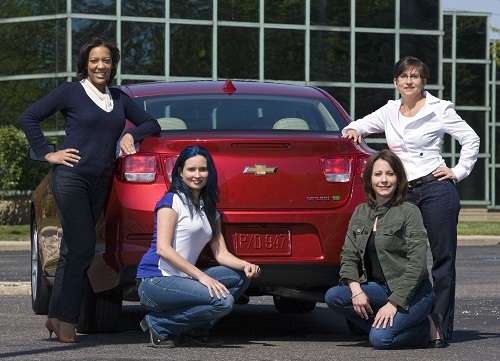 The real wives of Malibu are not trophy wives of movie industry Execs, but car designers for 2013 Chevy Malibu.
Advertisement

It is safe to say that one stereotype many of us suffer from is thinking of car enthusiasts, auto mechanics, and car designers and engineers as men. It is debatable whether this gender bias is based on some fact, but one thing that is not up for debate is the reality that women buy more than half of all cars. Chevy also revealed in a recent press release that women are involved in about 80% of car buying decisions for their family. Any car maker that only had male engineers and designers would be at a huge disadvantage. Chevy knows this and supports the GM foundation which encourages women to pursue the Science and Math courses needed to be part of the technical teams at GM. Four women on the Malibu team now highlight how important gender diversity can be in designing a family car.

Malibu Moms
Tracy Mack-Askew is responsible for the 2013 Chevy Malibu development and on-time launch. Like many engineers she has made important contributions along the path of her career. She holds a patent related to extending bulb life in automobiles. In addition to her engineering degree she holds master’s degrees from both Purdue and Harvard University. Oh, and by the way is a mom of two. Her interest in automotive engineering was sparked during a high school field trip during which she witnessed a crash test.

Kara Gordon is an acoustics engineer with GM. With special training in audiology and acoustics her job is to eradicate the N from the NVH (Noise Vibration and Harshness) part of the Chevy Malibu. One example she recalls involved trying to hear her youngest while driving. “We were about to get on the freeway and my younger son was mumbling something I couldn’t hear. I kept asking him over and over what he was saying and my older son finally yelled, ‘His seat belt isn’t buckled.’ So I pulled over – luckily – before we actually got on the highway.”

Suzy Cody enjoys being called by her roller derby nickname, “Shovy Camaro. “ Shovy has a degree in aerodynamics and worked to reduce wind resistance on the Malibu to improve fuel economy. Shovy takes her work personally saying “I’m a single mom, and every dollar I spend on gasoline is a dollar I’m not investing in my boys’ futures. So this is personal to me.”

Julie Kleinert has responsibility for child occupant safety. Her 27 year engineering career gives her the tools she needs to improve the safety of the Malibu, but it is her real-life experience as a mother and grandmother that puts it into perspective for her. She says “Knowing that the work I do helps protect other people’s children is very rewarding,”

Real moms with engineering and design skills can be an important asset to automakers given the fact that more than half of cars are bought by women.

Tsingshan's Threat to Tesla: EV Maker Is In Battery Crosshairs
Tesla-Funded Research Reveals One of The Biggest Mysteries of EV Battery
END_OF_DOCUMENT_TOKEN_TO_BE_REPLACED