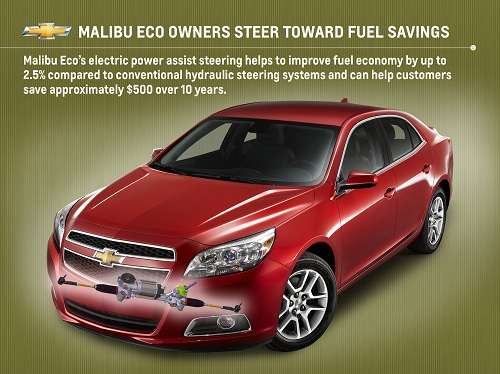 With multiple fuel saving technologies the new Chevy Malibu Eco has outstanding fuel economy which translates to real world money savings for its owners, but it is not called a hybrid by GM
Advertisement

How much fuel does an electric car or exotic hybrid save if nobody buys one? A snide question yes, but that is the sad fact of the automotive industry. However, now that hybrid technology has matured, there are many fuel saving technologies that were once quite exotic trickling down to the affordable, mainstream cars that sell in large numbers. Interestingly, the word hybrid is starting to be left out of the description of these cars.

Malibu An American Icon
The Chevy Malibu is icon in American automotive history. Available as an economical family car as far back as the 1960s it elicits positive thoughts in many baby boomers’ minds. One reason for that may be that the Malibu and its near-twin, the Chevelle, were popular muscle cars when outfitted as 2-door coupes in the late ‘60s and early 1970s. The fuel mileage of the V8 engines in those coupes was never even mentioned when the cars were discussed. Only the horsepower mattered. The new Malibu now struggles to keep up with competitors such as the Camry, Accord, Sonata and Optima, all of which offer more powerful engines than the 2013 Malibu.

Chevy eAssist
The restructuring of GM has changed the focus of Chevy. Fuel economy in the sedans it produces now must be world class because to stay profitable these high volume family cars have to offset some of the most thirsty, and profitable, cars GM produces such as the Suburban. Technology developed for full hybrid cars is now mature and finding its way into the Malibu. Chevy trys hard to de-emphasize the fact that the Malibu Eco is actually a hybrid. Rather it says the Eco “Features eAssist.” Unlike the Camry and the Sonata, the Chevy is not labeled “hybrid” even though it has an electric motor/generator, a battery from which that motor draws its power, and uses regenerative braking to help charge the battery. It also features stop/start technology. Sounds exactly like a hybrid when put that way. Chevy makes the bold claim that the eAssist system saves the owner almost $6,000 over the life of the car.

Electric Power Steering
Chevy also uses electric power steering which it says saves the Malibu owner up to $500 over the life of the car in fuel. No word on how much cost the steering system adds compared to the old hydraulic system. Bear in mind that the added cost may be acceptable in the Malibu if the fuel savings allow for sales of very large vehicles like the Suburban. Mark Meyers, GMs global vehicle performance manager points out that “By the end of the 2013 model year, more than half of all (GM) vehicles will have electric power assist steering.”

As hybrid technology matures further look for more models to incorporate some of the technology and for customer fuel savings to increase dramatically in all but the most sports-oriented models.