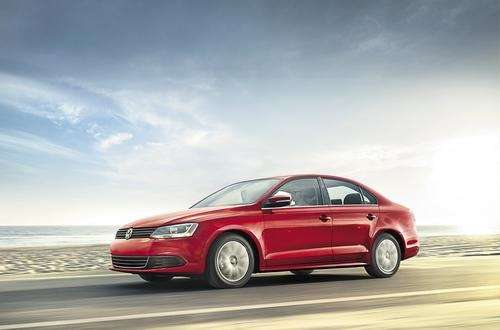 Starting soon, the Volkswagen Beetle Turbo, Beetle Convertible, and the Jetta GLI will have an important mid-year change buyers must watch for. Don't get caught with the old version.
Advertisement

Buyers of the 2013 Volkswagen Jetta GLI and the VW Beetle Turbo and Beetle Convertible are in for a pleasant surprise. As a mid-year running change to the three models the 2.0 Turbo engine is being upgraded to the new third generation version. Buyers will enjoy some nifty benefits compared to the current 2.0 Turbo as we explain below.

Volkswagen was one of the first US manufacturers to move heavily to the turbocharged four cylinder engine. Starting in the mid-1990s Audi began to bring the small turbocharged four cylinders into the US on the premium cars like the Audi A4. The 1.8 Turbo originally had less than 150 horsepower. However, the V6 engines Audi and VW offered at the time in cars like the Passat and A4 (then very similar cars under the skin) were anemic and thirsty. So by comparison, the “1.8T” became known as the good engine in the mid-size and compact sedans. What made the 1.8T better than its specification sheet might promise was that the torque delivery was in the lower RPM ranges and the car felt good when driven at moderate throttle.

The current 2.0 Turbo is the second generation of Turbocharged small four cylinders produced by Volkswagen group. The engine is used widely in both VW and Audi models. However, unlike its competitors, Hyundai for example, who produce upwards of 275 horsepower from their 2.0 Turbos, VW has always kept the engine in the low power ranges comparatively. For both cost and reliability reasons this has served VW well. Hyundai’s engine is now fully proven and reliable, but there was some question about the durability of an engine with so much boost (turbocharged compression pressure) in a mainstream car. At only 200HP Volkswagen’s engine was one of the weakest 2.0 Turbos in the market.

That is changing with the Generation 3 engine. Known by VW and fans as the EA888, the new engine has many changes. The upshot of which is the Beetles and Jettas which have the engine will shave about two-tenths of a second off their 0-60 mph times. Even better for buyers, the fuel economy is expected to jump by approximately two to nine percent depending upon the driving type. There are other engines for the Jetta to consider, as we discussed in a recent story.

In order to make the new engine more durable the car now has roller bearing on the twin balancer shafts. In order to reduce parts the exhaust manifold and cylinder head are now one piece and the crankshaft has 4 counter-balance weights instead of 8. To reduce the weight of the engine the crankcase now has a thinner wall casting. These changes save eight pounds compared to the older Gen-2 version.

The new engine is being introduced mid-cycle starting soon along with some cosmetic changes. If you are shopping for a Jetta GLI or a Beetle Turbo or Convertible be sure to buy the newer version of the 2.0 Turbo.

Fred Haines wrote on October 23, 2016 - 2:58pm Permalink
How can you find out which motor is in the 2013 Beetle 2.0 turbo if there is a mid year change? I have not purchased the car yet but have the vin number.
John Goreham wrote on October 26, 2016 - 7:52am Permalink
Hi Fred, the only way I would say is trustworthy would be to ask a VW dealer to tell you the full specs on the vehicle based on VIN.