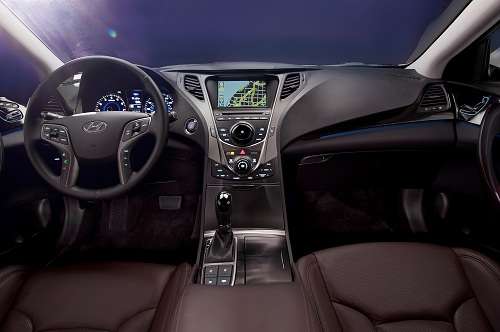 The 2012 Azera is the sleeper of the Hyundai family, but its many new awards might wake a sleeping giant
Advertisement

Many people know the name Toyota Avalon. It is fair to say that the name Chevrolet Impala also has a familiar ring. However, in the world of full-size, front-drive automobiles it is the unfamiliar, Azera, racking up the awards. Yes, Hyundai has a large, front-drive sedan bigger than the Sonata and lower in price than its rear-drive luxury car the Genesis. The Azera has been long overshadowed by the hugely successful mid-size Sonata, and its world-beating Elantra, but that may be about to change.

Safety, Fuel Efficiency, and Reliability
Cars.com has just named the Azera a “Best Bet” for 2012. Patrick Olsen, the Editor In Chief at Cars.com, states that “The redesigned Hyundai Azera offers a roomy cabin, great value for the price and solid reliability…This vehicle and the others from Hyundai that we have named a ‘best bet’ are vehicles that any of our editors would drive.” Joining the Azera on the list were the Tuscon Genesis Coupe, and of course the Sonata and Elantra. Cars.com based the awards on fuel efficiency, reliability, and safety. Scott Margason, Director of Product Planning of Hyundai, was pleased with the rating saying “It’s an honor to have Cars.com editors recognize the Azera and five other Hyundai models on their list of vehicles to buy in 2012,”

Direct Injection
Torque News brought word of the new Azera in the fall of 2011. Features noted were the best in class fuel economy, advanced technology, and safety equipment that puts it on par with many premium models. For example, the new engine in the Azera is a direct injected V-6. Until recently this is technology that was to be found only in premium automobile brands or very small four cylinder engines. With nearly 300 horsepower the car would have well been considered a muscle car not long ago.

Splendid Interior
Next to the Cars.com award on Azera’s trophy shelf now sits the WardsAuto.com 10 Best interiors 2012 award. This award, which was awarded after 40 cars were considered, takes no price cap into consideration. That means the interior of the Azera was judged right alongside such brands as Audi, Mercedes, and Lexus. Tom Murphy, speaking on behalf of Ward’s says “The Azera serves notice to luxury brands everywhere that Hyundai aspires to be known for much more than great value.”

Hyundai continues to roll out hits with its mainstay models, and now with the successful Azera, which is a model it had previously received little notice for.