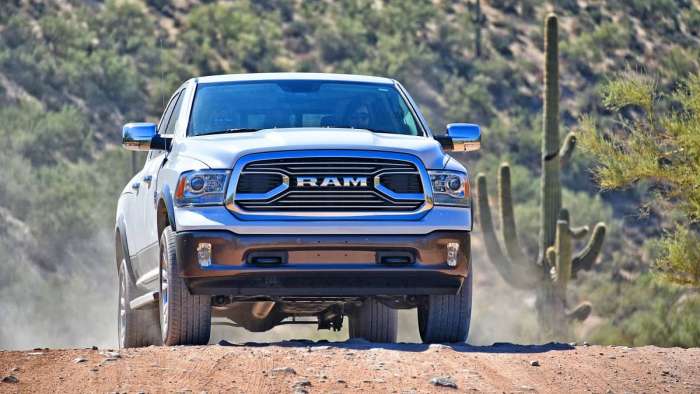 Ram trucks are being leased for as little as $129.00 per month, less than many compact sedans.
Advertisement

The 2018 Ram 1500 Crew Cab has been singled out by the experts at Wantalease.com as the single best lease deal in America. It may sound too good to be true, but the 2018 Ram 1500 is leasing for as little as $129 per month for 24 months with $2,999 down. Thinking this could not be a real deal, Torque News did our own checking. 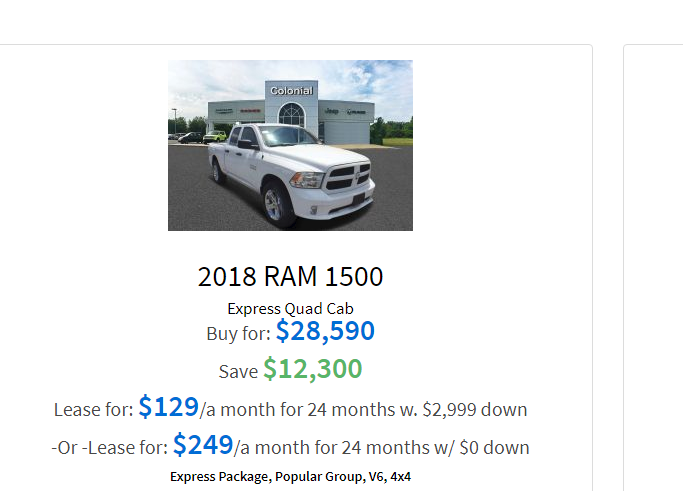 We confirmed the lease deal with a quick keyword search and found that it was even offered very near to our local office in Massachusetts. Still skeptical, we phoned the dealership (Colonial South in Dartmouth) who posted the deal, asked for sales and were connected to an associate that re-confirmed that the posting is current. The truck is a V6 4x4. By any measure, this lease deal is special, but by the pound it is amazing.

In addition to the Ram 1500 lease deal, Wantalease.com found special deals on the Chevrolet Cruz priced at $209 per month, the Ford Focus priced at $157 per month, and the Toyota Corolla priced at $199 per month. The devil is always in the details, so be sure to check on money down and miles allowed before getting your hopes up too high. Still, Scot Hall, Executive Vice President of Wantalease.com, says there is reason to be optimistic. “We’re seeing dealers offer more aggressive lease promotions on compact cars and sedans, further supporting that manufacturers and dealers are heavily interested in moving smaller cars off the lot to get ready for 2019,” said Hall. “Crossovers and SUVs continue to capture the attention of the American consumer, and manufacturers are luring lease shoppers with attractive end-of-year deals to showcase smaller vehicles with lease offers.” Lease prices on the models mentioned above have been trending down by as much as 13% over the past months.

U.S. News Autos also recently pointed to the Ram 1500 as a good truck buy, even for the new trucks. The group says that most current Ram truck deals include no-interest financing for three years on the fully redesigned 2019 Ram 1500. U.S. News says that in some configurations the 2019 model is leasing for $289 per month for three years with $3,499 due at signing.

*Note 2018 Ram 1500 shown at the top of the story is for representation purposes only and may not be the exact trim mentioned in our story. This story is not a paid placement.

Ray Hamilton wrote on April 29, 2021 - 7:51pm Permalink
Had a 09 that just blew a engine. Need in something soon. Can you please contact me.Thanks