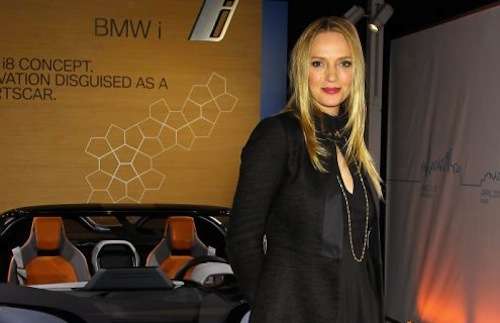 Thurman not only served as guest of honor at BMW's kickoff event, but also managed to test drive the concept vehicle.
Advertisement

On Monday, actress and New York resident Uma Thurman helped unveil the new BMW i8 Concept Roadster at the Born Electric world tour opening night in New York City. As part of the festivities, Thurman got to test drive the upcoming vehicle, which is set to be released in 2014. BMW North America CEO Ludwid Willisch joined the 42-year-old Kill Bill actress at the event. Aside from the i8 Roadster, the event also included the BMW i3. The weeklong festivities continue through Sunday at 1095 Avenue of the Americas in New York City.

No stranger to car promotion, Thurman starred in a series of Alfa Romeo Giulietta commercials in 2010. The advertisements, which aired in Italy, showed Thurman playing five different women, each of which represents a certain aspect of the car.

According to BMW, the i8 Concept is the “most progressive and innovative sports car of its time.” The sport scar touts a pioneering plug-in hybrid concept combined with a modified electric drive system based on the BMW i3 Concept. The innovative BMW i8 contains a high performance three-cylinder combustion engine that produces 164/kW/220 hp and 300 Nm (221 lb-ft) of torque. The electric drive system and combustion engine work in tandem to deliver the performance of a high-end sports car, while possessing the fuel consumption of a small car.

The BMW i8 features a lithium-ion battery, which can travel up to 20 miles on one electric charge. The vehicle also boasts distinct 2+2 seating, which provides enough space for four people.

The i8 Concept Spyder took home the 2012 Concept Car of the Year title at the North American Concept Vehicle awards show. The award ceremony included 33 other concept vehicles, each of which was introduced at auto shows in Los Angeles, Detroit, Chicago, Toronto, and New York. The North American Concept Vehicle awards recognize concept vehicles that are most likely to shape the future of the automobile industry.