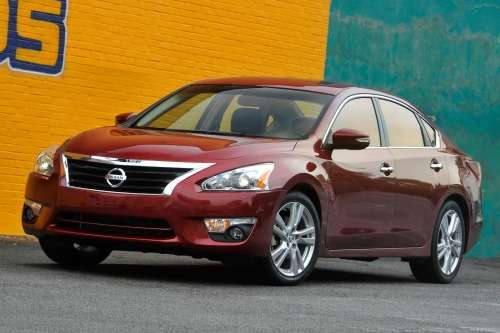 The recall comes just one year after Nissan recalled 20,000 model-year 2011-2012 Altimas due to an identical suspension issue.
Advertisement

The National Highway Traffic Safety Administration has announced the recall of select model-year 2012-2013 Nissan Altima vehicles manufactured from May 10, 2012 through July 26, 2012. The vehicles in question may contain traverse link bolts and power steering rack that were not properly torqued. Consequently, the affected bolts may become loose and fall out, leading the driver to lose control of the vehicle and possible crash. The primary indication of loose suspension bolts is rattling. The recall affects 13,919 Nissan Altima vehicles.

Nissan will contact owners of affected vehicle beginning on, or about October 29, 2012. Nissan dealers will tighten the bolts to proper specification, free of charge. In the meantime, owners may contact Nissan at 1-800-647-7261. Concerned owners may also contact the National Highway Traffic Safety Administration Vehicle Safety Hotline at 1-888-327-4236 or visit www.safercar.gov. The NHTSA Campaign ID Number is 12V494000.

Saturday’s recall is the first to be issued involving the 2013 Nissan Altima, but not the first concerning the 2012 Altima. The 2012 model has been affected by three recalls including another suspension bolt issue. In fact, Nissan recalled 20,000 2011-2012 Altima models last year due to the very same torque specification problem.

Aside from suspension issues, the 2012 Altima was also involved in a pair of air bag recalls. In 2011, Nissan recalled 54 Altima vehicles over an improperly assembled air bag control unit. Earlier this year, Nissan recalled nearly 1,000 model-year 2012 Altimas and Nissan Versas due to a side-curtain air bag problem. Nissan contributed the 2012 recall to a “supplier error” by Autoliv.