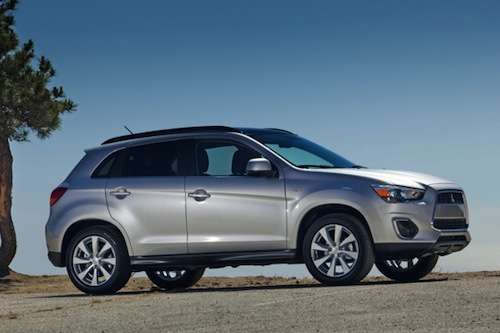 Mitsubishi Motors North America is recalling certain 2013 Mitsubishi Outlander Sport SUVs due to a suspension problem, which may increase the risk of a crash.
Advertisement

Consequently, the link may separate and damage the tire and/or brake hose. As a result, the driver may experience increased difficulty controlling the steering wheel, and in some cases, the vehicle may take longer to come to a complete stop. Both scenarios increase the risk of an accident, according to the National Highway Traffic Safety Administration.

Documents filed with the NHTSA indicate that Mitsubishi discovered the problem in May after receiving a customer complaint. In June, Mitsubishi and its parts supplier determined that insufficient welding was the main culprit. There have been no crashes or injuries related to the recall, according to Mitsubishi.

Of the 305 vehicles being recalled, Mitsubishi believes that about 120 suffer from inadequate welding. Three of these vehicles have been repaired so far.

Mitsubishi dealers will inspect, and if needed, replace the front strut assembly at no cost to the owner. The automaker has not provided the NHTSA with a recall notification schedule, but did state that it's working internally to determine the dealer and customer notification dates. In the meantime, Outlander Sport owners may contact Mitsubishi at 1-800-222-0037. The recall number is SR-13-008.

The news marks the third time the 2013 Mitsubishi Outlander Sport has been recalled this year. In April, Mitsubishi recalled 4,539 Outlander Sport SUVs due to faulty brake lamps. According to the NHTSA, the affected models may be equipped with brake lights that either work intermittently or that continuously illuminate without pressing the brake pedal. The vehicles in question may also shift out of park without using the brake pedal. Each condition increases the likelihood of an accident.

The Japanese automaker also recalled 3,724 Outlander Sport vehicles in April because certain SUVs may have been built without a fuel sending unit harness, which can cause false fuel tank level readings. Such a condition is problematic because the driver may think there is fuel in the tank when it’s in fact empty.