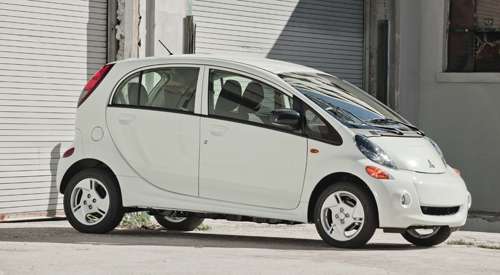 Mitsubishi has announced the recall of 1,402 model-year 2012 Mitsubishi i-MiEV compact electric cars due to brake problems. The affected models, which were manufactured from Dec. 2, 2011, through Sept. 7, 2012, contain a faulty brake system vacuum pump. Consequently, this may cause the brakes to fail, increasing the risk of an accident. There have been no accidents or injuries reported, according to Mitsubishi.

Mitsubishi has yet to provide owners with a recall notification schedule because of a parts availability issue. Authorized Mitsubishi dealers will replace the affected parts for free once they become available. In the meantime, owners can call Mitsubishi at 888-648-7820 or visit Mitsubishi’s Recall website. Concerned customers can also contact the National Highway Traffic Safety Administration’s Vehicle Safety Hotline at 888-327-4236 or visit www.safercar.gov for more information.

The Japanese-based automaker previously recalled the Mitsubishi i-MiEV last summer over airbag concerns. The recall, which affected 261 vehicles in the United States and 49 in Canada, was issued due to an inconsistency between the car’s self-diagnostic software and the airbag sensor. As a result, the vehicle’s frontal and side airbag system may deactivate, causing the airbags not to deploy in the event of a crash.

The Mitsubishi i-MiEV has had great difficulty distinguishing itself in the America’s electric vehicle segment since it was introduced in December 2011. Despite posting its first individual customer delivery on December 12, 2011, Mitsubishi has sold just 688 vehicles in the United States through December 2012.

Although the Mitsubishi i-MiEV is priced well below rivals like the Nissan LEAF, critics argue that it cannot compete in terms of overall quality and performance. In June, Consumer Reports skewered the all-electric vehicle calling it “crude.” Aside from an overall lack of refinement, the consumer watchdog site also took the Mitsubishi i-MiEV to task for causing “range anxiety,” a term that Consumer Reports uses to illustrate the uncertainly surrounding an electric vehicle’s range.

Poor sales and reviews have led Mitsubishi to turn its attention away from the i-MiEV in recent months. The company has instead turned its attention to plug-in hybrid models like the Mitsubishi Outlander PHEV, which is set to hit dealerships in 2014.