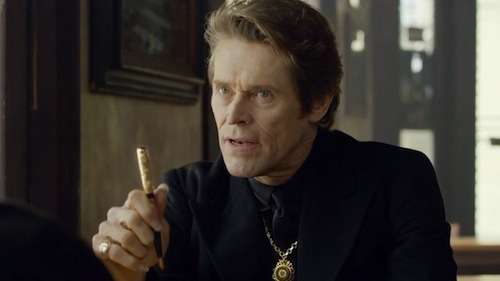 What would you do for the all-new Mercedes-Benz CLA? Mercedes-Benz's new Super Bowl commercial features Willem Dafoe as the Devil attempting to get an unsuspecting man to sign his soul away for the upcoming luxury compact car.
Advertisement

Less than a week after Mercedes-Benz revealed its forgettable “Kate Upton Washes the All-New Mercedes-Benz CLA in Slow Motion” ad, the luxury automaker has redeemed itself with the release of its official Super Bowl XLVII commercial “Soul.” Leaps and bounds above its Big Game teaser commercial, Mercedes-Benz latest ad once again enlists the talent of Upton, as well as pop star Usher and critically acclaimed actor Willem Dafoe. Not to mention, the ad features the classic Rolling Stone’s song “Sympathy for the Devil.”

Mercedes-Benz’s new commercial stars Dafoe as the Devil attempting to get an unsuspecting young man to sign away his soul for an all-new Mercedes-Benz CLA and all the glory that comes with it. So what does Dafoe (star of the aptly titled Antichrist) guarantee his potential client? Our protagonist is promised a slew of enticing scenarios such as a red carpet date with Kate Upton; a dance off with Usher; a magazine photo shoot and an entry into a Formula 1 race.

In the end, Dafoe is unable to sway his would-be prey thanks to a nearby Mercedes-Benz CLA billboard. The Dark Lord’s plans are foiled once the young man catches a glimpse of the CLA’s affordable $29,900 price tag. “Thanks, but I think I got this,” says the man to Dafoe, who then angrily bursts into a cloud of smoke. Check out the ad below.

So far, the Facebook and YouTube response to the ad has been overwhelmingly positive, which is more than can be said for last week’s teaser. Despite garnering over 5 million views on YouTube, “Kate Upton Washes the All-New Mercedes Benz CLA in Slow Motion” has been the subject of derision amongst Internet viewers. In fact, the video has received 2,615 dislikes compared to just 2,402 likes.

The unpopular ad has endured criticism from both males and females alike. The majority of male YouTube and Facebook commentary focuses on the ad’s misleading title, because the commercial actually features a group of men washing a car, while Upton looks on. On the other hand, females criticized the Mercedes-Benz for resorting to sex to sell the CLA.

“This ad has cheapened the classy Mercedes car,” said one Facebook comment. “Surprised that Mercedes had to stoop to that level. Was not in line with sophisticated Mercedes Buyers.”

Set for a September release, the Mercedes-Benz CLA is a new four-door compact executive car based on the Mercedes-Benz A-Class platform. The CLA was officially launched at the January 2013 North American International Auto Show in Detroit.

John Goreham wrote on January 30, 2013 - 3:54pm Permalink
Defoe defined cool since he was Eric Masters in To Live and Die in LA. "I've been coming to this gym three times a week for five years. I'm an easy guy to find."
Anonymous wrote on February 5, 2013 - 10:02am Permalink
I am shocked that more people are not shocked that a car manufacturer(particularly a German car company) chose to use "Sympathy for the Devil" to sell their cars. Has anyone listened to the words? As a song and in its proper context, the song is powerful and thought provoking. As an ad for a car it is tasteless and insensitive. What were they thinkiing? Perhaps they counted on the "cool" of the Rolling Stones to cover for them. For that matter, what were the Stones thinking? What's next, "Tomorrow Belongs to Me"? This is not about religion, this is about good taste and historical sensitivity. Thumbs down.
Anonymous wrote on February 5, 2013 - 3:14pm Permalink
It's obvious that Mercedes marketers know more about their job then you. Mercedes Drivers are now probably a bunch of drug dealers, Rock and rollers, and young Corperate execs on cocain. wake up and smell the roses. Besides, People who listened to the stones are now 60 and 70 years old....HELLOOOOOO is there anybody any there? lol.