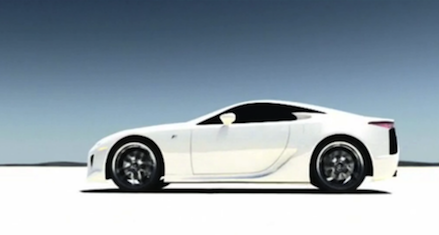 Dubbed the LFA-h, this hydrogen-powered car features a V10 engine that is capable of producing up to 600-hp.
Advertisement

Lexus has just released a 45-second video showcasing the forthcoming Lexus LFA-h, a hydrogen-powered version of the Lexus LFA. The minimal ad depicts the LFA-h driving through barren terrain, emitting water vapor. The vehicle's emissions then hit the ground, causing plants to grow; justifying the “fuel for life” slogan that flashes across the screen. Finally, the video ends with a simple graphic telling viewers that the LFA-h is a 600-hp V10 vehicle that only emits water. Though Lexus has not released production details on the LFA-h, the luxury automaker currently plans on producing just 500 units of the LFA worldwide, with 10 percent of those in North America. Unlike its brethren, the LFA is a gas-powered vehicle with a 4.6-liter V-10 engine that produces up to 552-hp and a top speed of 202 mph. As for a sticker price, the LFA costs $375,000.

Although hydrogen car rumors had been percolating since the original LFA concept was introduced, Lexus is only just now confirming the news by releasing the video. Despite the video, the LFA-h is merely a concept right now and Lexus has neither confirmed nor denied that the car will go into production.

Though only engine specifications have been released, the video illustrates that the exterior of the LFA-h is seemingly identical to its predecessor. The LFA body has an aerodynamic style that contains shard edges and cutoffs, with an emphasis on downforce. The car’s rear includes air scoops above the fenders, which helps with brake cooling. There is also a horizontal hood gap designed to feed air to the engine. The LFA is currently available in 28 different colors, but LFA-h color options have not been confirmed. Material-wise, the two vehicles are likely the same as the LFA contains fenders, doors, roof rails and rocker panels all made of blast fiber reinforced sheet panels. As for tail lamps, the LFA comes with light-emitting diode (LED) lights.

The Lexus LFA-h video only depicts the vehicle’s exterior, but if the interior is anything like the LFA it will contain a combination of carbon fiber, leather, alcantara and metallic surfaces. The interior features two bucket seats and Lexus’ Remote Touch controller interface. The LFA also includes a thin-film transistor (TFT) speedometer with a color changing background.

Upon its initial production in 2010, both Car and Driver and Motor Trend praised the LFA and in comparison to rival supercars like Mercedes-Benz SLR McLaren and the Enzo Ferrari. Unlike Lexus, Mercedes-Benz and Ferrari do not currently have an entirely hydrogen-powered concept in their repertoires, although they both posses hybrid concepts that store hydrogen.

Stay tuned for more information about the LFA-h as details are released.