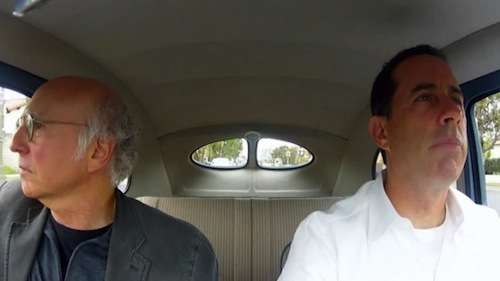 Do you enjoy cars and comedians? How about the two together? Well, you are in luck, because comedian Jerry Seinfeld’s new show Comedians in Cars Getting Coffee is set to debut on July 19. Based on the name and clip, the show appears to be just as described. The show’s trailer showcases Seinfeld, along with fellow funnymen like Ricky Gervais, Alec Baldwin, Larry David and former Seinfeld co-star Michael Richards. Aside from the comedians, the clip shows Seinfeld driving around in a number of classic cars including an old Mercedes, a Triumph and a Porsche.

Although the show was pitched in May, it has not landed on any network. It has instead found its way onto Crackle, an online digital network that features commercially supported streaming video. Similar to YouTube and Hulu, Crackle provides it content through a web syndication network. Interestingly, Crackle is owned by Sony Pictures Entertainment who currently owns the rights to Seinfeld.

Seinfeld’s affinity for cars is no secret. In fact, Seinfeld is an avid collector and it’s estimated that he owns 46 Porsches. In the 1990s the comedian had to rent a hanger at the Santa Monica Airport to store a portion of his collection. It is reported that Seinfeld’s current Porsche collection contains multiple Porsche 911s, 10 Porsche Boxsters, and a 1955 Porsche 550 Spyder, which is the same model and color that James Dean was driving when he was killed in a car crash. Seinfeld also owns an ultra-rare Porsche 959, one of only 337 ever built. The man owns so many Porsches that he even gave one to his wife Jessica when the two were married in 1999. A truly cool wedding gift indeed, Seinfeld gave Jessica a $40,000 1958 Porsche 1600 Speedster.

A self-described “Porschephile,” Seinfeld has even written Porsche reviews for prominent publications like Automobile Magazine. Seinfeld’s 2004 review of the Porsche Carrera GT earned him the Road Pest Silver award at the 2004 International Automotive Media Awards.

The comedian’s love of cars was spoofed in an Acura NSX commercial earlier this year during the Super Bowl. The ad depicted Seinfeld going to extreme measures to obtain the top spot on the NSX waiting list. Seinfeld was unsuccessful in the end, foiled by fellow comedian and car-lover Jay Leno.

Comedians in Cars Getting Coffee debuts on July 19 at 9 p.m. EST.

Image: Screenshot from Comedians In Cars Getting Coffee

Patrick Rall wrote on July 6, 2012 - 9:29am Permalink
I think that it is going to flop - just like most of these celebrity car shows in the US. When it comes down to it, the kind of "car guys" who watch the Speed channel dont have anything in common with a panel of rich guys joking about how they only bought one Lamborghini last week. I like Jerry Seinfeld but real car guys dont like fake car guys and that is what celebs like seinfeld are. It isnt like Jerry has ever been wrenching on his car out in the driveway...hes into cars because he has millions of dollars laying around so he spends some on cars. that doesnt equal a car guy.