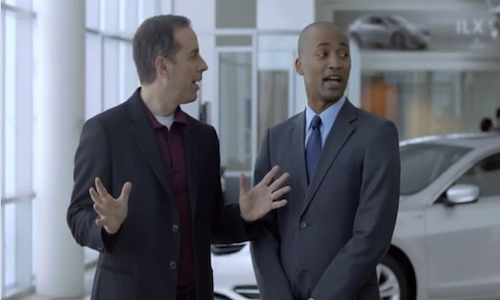 A newly released casting announcement for Acura's Super Bowl ad reveals that the automaker did not want black actors that were too dark.
Advertisement

Remember last February’s Super Bowl commercial for the 2012 Acura NSX featuring Jerry Seinfeld? It turns out that the seemingly innocent ad is sparking some controversy due to a casting document obtained by TMZ. The popular celebrity news site has just revealed the official casting announcement for the commercial, which described the type of actor desired to play the ad’s car dealer. According to the document, the automaker wanted the car dealer to be portrayed by an African-American that was “nice looking, friendly, not too dark.” Not surprisingly, the later part of the actor’s description is making waves today and Acura is being taken to task for what appears to be racially insensitive request.

TMZ reports that Acura has yet to respond to any of the website’s calls. TMZ did state that the casting agency indicated that the “not too dark” specification was due to “lighting and special effects” limitations, which seems rather bogus. The Huffington Post has also picked up on the story is currently trying to contact Acura and the NAACP for comment. TMZ obtained the document through an unnamed African-American actor who did not get the role. Apparently the actor did not pass Acura’s skin pigmentation requirements.

Rp&, a division of RPA, which handles marketing for Acura and Honda, created the commercial. Craig Gillespie of MJZ served as director. Aside from commercials, Gillespie is highly regarded for his film work, helming such movies as Lars and the Real Girl (2007) and last year’s Fright Night remake.

For those who are unfamiliar with the ad, it featured an African-American car dealer apologizing to Seinfeld because he was second on the list to buy the all-new Acura NSX sports car. Seinfeld spends the rest of the commercial trying to bribe the No. 1 person on the list with a plethora of goodies, until ultimately being outdone by fellow comedian Jay Leno.

The 2012 Acura NSX concept made its debut at the 2012 North American Auto Show. The concept features a two-door design, mid-engine and all-wheel drive. The vehicle is made from ultra-lightweight materials and a high-tech platform. Additionally, the NSX boasts a V6 engine and three electric motors. Acura has not divulged how many horsepower this unique combination will produce. The NSX is expected to begin production in 2015 at the Marysville Auto Plant in Marysville, Ohio.

Stay tuned for more news on the controversy, as Acura will likely be forced to comment on the situation momentarily.