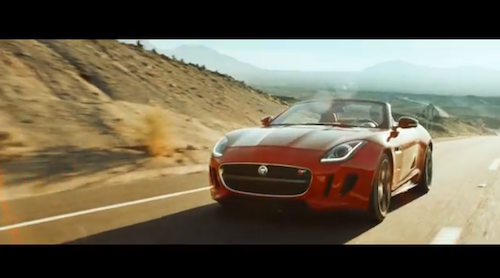 After months of anticipation, Jaguar has finally released its short film titled Desire, which showcases the all-new Jaguar F-Type. While epic car commercials are nothing new, Jaguar’s latest short film has raised the bar.

The movie centers on Clark (Lewis), a professional car deliverer who runs into trouble after meeting a mysterious woman (Sossamon) and her villainous husband Ernesto (Mollà). Perhaps Jaguar sums it up best with the film’s tagline: “One man, One job. But in the desert, nothing is simple.”

Jaguar first revealed plans for Desire in December of last year. Stars Lewis and Sassamon even helped promote the release of the film’s centerpiece – the Jaguar F-Type – when it debuted at last year’s LA Auto Show.

“When Jaguar approached me about the F-TYPE Desire film I was really intrigued,” said Lewis. “I then got to read the script and decided it was definitely a project I wanted to be a part of. Working with the director Adam Smith from Ridley Scott Associates, it promises to be an adventure. Jaguar cars have played some iconic roles in film for many years and I'm looking forward to being the first to drive the F-TYPE in film.”

The Jaguar F-Type was also featured in a 2-minute ad called Burning Desire, which was released in September. Opening with the warning, “Always obey your local speed limits,” the commercial stars Del Rey and two professional drivers drag racing F-Type coupes on a picturesque mountainous roadside. Click here to read Torque News' coverage of Burning Desire and to view the ad.

Based on a shortened platform of the Jaguar XK convertible, the F-Type is a two-seat sports car available in 3.0-liter supercharged V6 and a 5.0-liter supercharged V8 engine. The top range F-Type produces 488 hp and boasts a top speed of 186 mph. It also features an eight-speed automatic gearbox with paddle-shifters offering manual override. The F-Type has a “1+1” style interior setup with a touchscreen display. The luxurious sports car is also equipped with a innovative retractable rear wing spoiler and hidden door handles.

Although not confirmed, Jaguar has hinted at possible Plug-In Hybrid, Diesel and All Wheel Drive F-Type models.