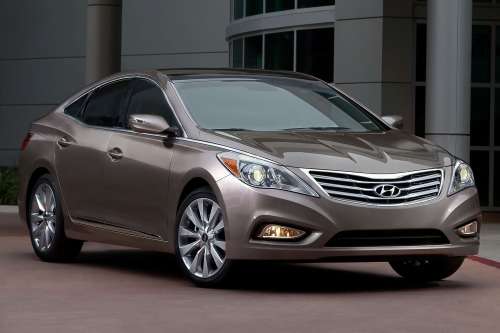 Hyundai Motor Company is recalling certain model year 2012-2013 Azera vehicles due to a troublesome defect that may lead to airbag malfunction.
Advertisement

The vehicles in question may contain a faulty occupant detection system (ODS), which may not be able to distinguish whether the front passenger occupant is an adult, child or child restraint seat. As a result, the ODS unit may improperly classify the occupant – which in the event of a crash – may cause the airbag deploying with too much or not enough force. In either case, improper airbag deployment greatly increases the risk of injury.

Hyundai first became aware of the airbag defect in November 2012 when its airbag sensor supplier informed the automaker of a fabric change on the sensor mat. According to documents filed with the National Highway Traffic Safety Administration, the fabric change could potentially impair the mat’s conductivity, therefore affecting the capacity of the sensor to differentiate passengers.

Hyundai has not provided the NHTSA with a notification schedule, but did state that authorized dealers will recalibrate defective airbag systems at no cost to the owner. Hyundai’s recall number is “Campaign 111.” In the meantime, Hyundai Azera drivers can call Hyundai Customer Service at 1-734-337-9499. Concerned customers may also call the National Highway Traffic Safety Administration’s Vehicle Safety Hotline at 1-888-327-4236 or go to www.safercar.gov. The NHTSA Campaign Number is 13V264000.

The Hyundai Azera recall comes just two months after the automaker recalled nearly 190,000 model year 2011-2013 Hyundai Elantra cars due to an airbag-related problem. According to the NHTSA, the headliner support brackets may become dislodged during side airbag deployment. Consequently, the headliner may come in contact with the occupant, causing an injury. Click HERE to read an in-depth analysis of Hyundai's recall.

The safety recall stemmed from a federal investigation, which was launched after the NHTSA received a complaint alleging that improper driver-side airbag deployment resulted in the laceration of a driver’s ear. A probe into the owner’s 2012 Hyundai Elantra found that the car’s headliner assembly detached during a crash and was forced downward by the airbag. As a result, the detached metal bracket cut part of the driver’s ear and caused other unidentified injuries. Click HERE for more information about last year's federal investigation.