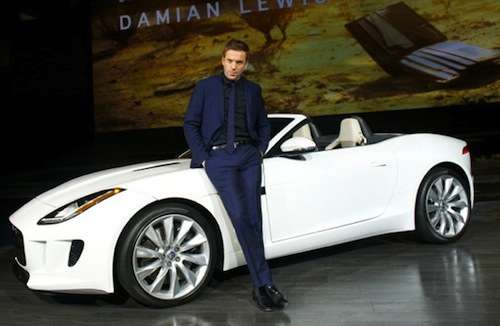 Homeland star Damian Lewis may have just won a Golden Globe for his acting, but does he possess award winning driving skills? Fans will soon find out, because the popular television show Top Gear has confirmed that Lewis will take part in the show’s "Star in a Reasonably Priced Car" segment.

Lewis, who plays Sergeant Nicholas Brody on Homeland, will be interviewed on the show’s 19 series premiere, as well as drive a lap on the Top Gear track. Former Friends star Matt Le Blanc holds the record for fastest lap time, which he managed to achieve in a Kia Cee’d. Other celebrities that have scored impressive times include Simon Cowell, Jimmy Carr, Ellen MacArthur and Rowan Atkinson.

Aside from Lewis, Top Gear’s upcoming season includes a US road trip in the all-new SRT Viper, an Aston Martin Vanquish, and a Lexus LFA. The show will also feature a race from Wembley to Milan to watch a football game and James May, the show’s co-presenter, trying his luck at rally driving. Top Gear returns for its 19 series premiere on Sunday, January 27 at 8 p.m. on BBC Two.

The longest running automotive show in history, Top Gear is a popular British program, which has spawned a magazine and an American spinoff in 2010. Top Gear was originally launched in 1977 as a conventional automotive magazine show, but was re-launched under a new format in 2002. The new format took a more humorous and controversial approach, which has greatly increased the program’s popularity. Jeremy Clarkson, Richard Hammond and James May currently present the show. Top Gear is currently broadcast in 170 different countries and gets roughly 350 million views per week.

No stranger to the automotive world, Homeland’s Lewis recently starred in a mini-movie to promote the Jaguar F-Type two-seater sports car. In addition to Lewis, the movie also stars Shannyn Sossamon (A Knight’s Tale) and Jordi Molla (Bad Boys II). The forthcoming film also features an exclusive track by Lana Del Rey called “Burning Desire.” Jaguar announced the short film back in November, but the full version has yet to be released. Click here to check out the teaser trailer for Desire.