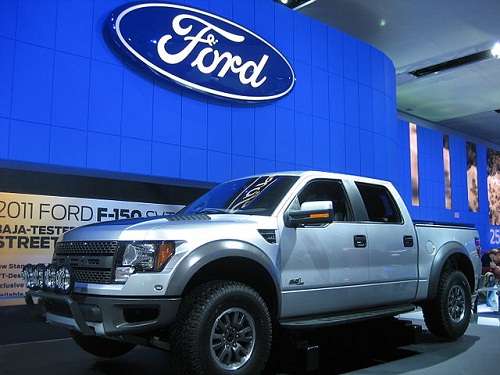 Despite a letter of warning from Ford and a possible lawsuit, GM stands by its decision to run their "post-apocalyptic" Super Bowl ad.
Advertisement

Last night's Super Bowl was not just a battle to determine which football team deserves to be called the champ. The title for world’s most reliable truck was also up for grabs due to a controversial General Motors advertisement. The ad in question features a group of men who have survived the apocalypse predicted in the Mayan calendar. Each of the survivors has one thing in common: they are all Chevy Silverado owners. At the end of the commercial, it turns out that not everyone was so lucky. Case in point, their friend Dave who was a Ford owner.

While it may seem tongue-in-cheek, Ford took issue with the ad’s accusations. Ford wrote a formal letter to GM prior to the commercial’s Super Bowl debut, requesting that it not be aired. The letter, written by Ford’s lawyer Lynne M. Matuszak stated, “Ford demands that Chevrolet immediately cease and desist from making any unsubstantiated and disparaging claims regarding Ford’s pickup trucks.” Matuszak also ordered that GM remove the ad campaign for YouTube, Facebook and their website.

Anyone who watched last night’s Super Bowl knows that GM did not comply with Ford’s request and aired the commercial during the game’s first quarter. The decision to run the spot has lead to Ford threatening GM with a lawsuit. Ford’s conclusion should come as no surprise, because their letter stipulated that they would “take all appropriate steps to enforce and protect its reputation.”

As for GM, they claim that the advertisement was a “good-humored” spoof on the 2012 doomsday scenario. Aside from defending the light nature of the ad, GM has refused to back down and will continue to run the 60-second spot.

”We stand by our claims in the commercial, that the Silverado is the most dependable, longest-lasting full-size pickup on the road,” said GM’s global marketing officer Joel Ewanick.

Opinion and commercials aside, there are several facts worth noting in regard to Chevy’s claims. Ford F-Series trucks have been the best selling trucks for 35 years running. Additionally, the Ford F-150 was the best-selling truck in 2011 with 584,917 vehicles sold, compared to 415,130 Chevrolet Silverado’s sold. Lastly, Ford is the brand with the most pickup trucks on the road with greater than 250,000 miles.

So when can Ford expect an apology from GM? Well, according to Ewanick: “We can wait until the world ends, and if we need to, we will apologize.”

Is the ad too harsh or all in good fun? Watch below and judge for yourself.

Anonymous wrote on February 6, 2012 - 10:55pm Permalink
LOL...... well government motors is known to make big claims that nobody can duplicate just like the corvair driven through the rain forrest or the gto out running the ferrari gto and the 03 corvette that could run 200 mph oh yea and the 0 to 60 and 1/4 mile #s on the 2012 camaro zl1 from a rolling start LMFAO. I WOULDNT GIVE UP MY 86 F250 4X4 WITH 430K MILES FOR A FREE TAX PAYER ROBBING GM .
lmao wrote on March 18, 2012 - 12:19am Permalink
I loved that ad and love that ford is crying like little girls. I recall seeing an f150 commercial with a punching bag being punched that had chevy and dodge written on it. They can throw a punch but not take one, kind of like the POS trucks that I see on the side of the road everyday. I will keep my 97 silverado with 500,000 miles and laugh at everyone that is driving a new ford.
dmaxxboy01 wrote on February 7, 2012 - 1:00am Permalink
is it not that the world has freedom of speech? so what its slandering like ford has never done it? i drive a chevy but i work for ford motor company why do people make such a big deal out of it in all honesty a truck is only as good as the person who drives it.
Aaron Turpen wrote on February 7, 2012 - 1:13pm Permalink
Having owned both a POS Ford and a POS Chevy, I can tell you this: after the apocalypse, only Toyota owners will still be around. HA! I'll wait for the call from your attorneys.
TEXASBOI281 wrote on February 7, 2012 - 5:51pm Permalink
I LOVED IT!!! NODODY CARES WHO SELLS MORE TRUCKS. THEY BROKEN DOWN RIGHT AFTER THERE BOUGHT AS WELL. SILVERADO LOOKS,RIDES,AND RUS SO MUCH BETTER THAN FORD TRUCKS. F.O.R.D. FOUND ON ROAD DEAD. OR BACKWORDS DONT RELY ON FORD
Anonymous wrote on February 10, 2012 - 11:24pm Permalink
C..racked H..ead E..very V..alve R..attles O..il L..eaks E..very T..urn. thats why chevy has brought 7 new engines into nascar in the past 10 years JUNKS JUNKS JUNKS and now GOVERNMENT JUNKS. counted 7 chevy junks broken down on interstate today in 40 miles JUNKS.
Chevy lover wrote on February 9, 2012 - 8:54am Permalink
Fords are POSs and they need to step up and realize chevy trucks are alot better. I know Chevy wont apoligize and they shouldnt. Ford actually owes all amercans an apology for makeing such a horible truck. Thank You and goodbye to fords after the apocalipse
anthony wrote on February 10, 2012 - 12:35pm Permalink
to bad Ford couldnt run there add about the bailout money GM took. Google it for your self. Washington DC put pressure on Ford on not running it. Government motors. "i heard you could use food stamps to buy them"!
johnny johnson wrote on November 2, 2015 - 6:42pm Permalink
GM didn't accept bail out money, GM American division took out a government loan that has since been paid back in full with interest. Part of the stipulations of the loan required that GM remove select car brands from the market. If you look at the foreign automakers, they were given actual bail outs from their respective countries and kept it quiet in the usa so they can try and look better. I can't say what Chrysler or for did, I don't follow them as much as GM. People try to bash GM, even ford and chrystler as american trash, but the sales don't lie, the domestic automakers are still the top 3 sellera in the USA, and GM globally is still top in the world. GM being the leading in overall sales of everything they produce. The chevy impala alone is outselling all the foreign cars put together from all foreign manufacturers. You can try and argue otherwise all you like, the facts are out there and proof enough. Just look at the older used cars, there are many more older domestic vehicles then foreign vehicles still around simply because domestic vehicles have better reliability and last much longer.
Kyle wrote on February 27, 2012 - 10:34pm Permalink
I think this commercial is completely hilarious. and ALL in good fun. I am a solid Chevy fan but I would buy a ford if the price was right, in fact I have almost bought two of them. If Ford had made the same commercial, I would have laughed just as hard. Ford needs to get over itself. Laugh and enjoy the brilliant idea somebody had for a 6.6 million dollar commercial.

Tesla Giga Berlin's New Hurdle: It's Not Only the Gov't, but Now Tesla Itself
Teslas Are Sold Out Until 2023, But The Timing May Reverse
END_OF_DOCUMENT_TOKEN_TO_BE_REPLACED