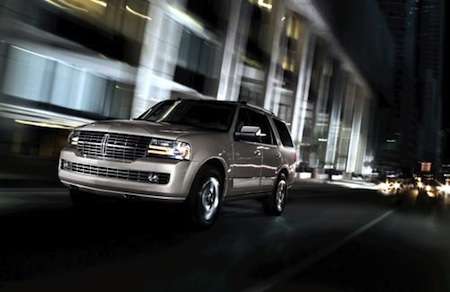 Over 500 Ford Expedition and Navigator drivers could soon see a recall notice in the mail.
Advertisement

The National Highway Traffic Safety Administration reports that Ford is recalling 569 2012 Ford Expeditions and Lincoln Navigators due to faulty welds on the head-restraint support brackets for the second-row right-hand seat. The vehicles in question were manufactured from November 19, 2011, through December 2, 2011 at Ford’s Kentucky Truck Assembly Plant.

Due to the defect, Ford is currently in violation of Federal Motor Vehicle Safety Standard No. 202, “Head Restraints,” which states proper head restraints must "limit rearward displacement of a seated occupant's head relative to the occupant's torso" and "reduce the frequency and severity of neck injuries in rear-end and other collisions.” Click here for a full description of the safety standard.

This manufacturer defect could result in the head restraint not providing sufficient support in the event of a crash, thus increasing the risk of injury. Ford first notified the federal government of the safety issue on January 13, 2012. Ford has yet to receive any warranty complaints about the issue.

Ford will begin notifying Expedition and Navigator owners on February 20. Once notified, owners can simply bring their vehicle to a Ford dealership and get the head restraint replaced, free of charge. Owners may contact Ford’s Customer Relationship Center at 1-866-436-7332. For more information about the recall contact the NHTSA at 1-888-327-4236 or online at www.safercar.gov. When contacting either Ford or the NHTSA refer to the Ford safety recall campaign No. 12C22.

Ford has not issued any recalls on either the Expedition or Navigator since June of 2009, when 1,357 2009 SUVs were recalled due to defective brake stop lamp switches. Although recalls have not been an issue recently for Ford, it has been a major problem throughout their history. Ford previously issued 80 recall notices, affecting the Expedition and the Navigator, in a ten year period.

The Expedition and Navigator were first introduced in 1997. Although once popular, these full-size SUVs have seen sales dwindle in recent years due to consumers craving more fuel-efficient options. Navigator sales have gone from a high of nearly 44,000 in 1998 to a record low of just over 8,000 in 2011, while sales of the Expedition have drastically dipped from over 230,000 in 1999 to 40,000 last year.

The 2012 Expedition cited in the recall is currently ranked second overall in Best Affordable Large SUVs by U.S. News Rankings. The 2012 Navigator, on the other hand, ranks second to the bottom in terms of Best Luxury Large SUVs.

For more information about the Ford Expedition, Navigator recall visit www.safercar.gov or Ford's own website for dealership information.