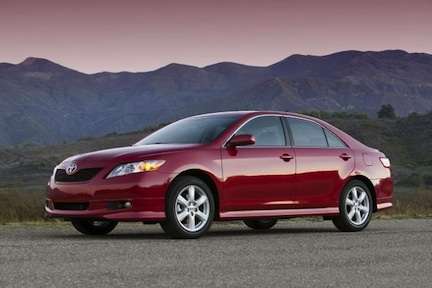 Will the upcoming federal investigation damage the Camry's ranking as best-selling car in America?
Advertisement

In a week with by recalls by Nissan and Ford, the National Highway Traffic Safety Administration may soon add Toyota to the list. The NHTSA has just began an investigation into 830,000 2007 RAV4s, Camry and Camry Solara vehicles due to consumer allegations of door fires. The NHTSA announced the investigation on Friday after it received six complaints reporting fires in the driver’s side door, likely due to faulty power windows.

One Toyota owner told the NHTSA that he experienced a “burning odor” followed by “flames” inside his driver’s side door. “The police and fire department were notified and no injuries were reported. The vehicle was destroyed,” the owner added. Another owner indicated that the fire issue was brought to Toyota’s attention, but the car company did nothing.

"Toyota would not fix because (too) many miles," the complaint said. "I was so afraid to drive the fire trap I traded it in for a new car. The RAV4 was paid off. Now I have a car loan at 19.9 percent."

Based on the consumer complaints, the NHTSA believes that the cause of the fires is a malfunctioning master switch, which controls the power windows. The NHTSA made a similar conclusion in regard to the massive Honda recall, which took place last year. Honda recalled a total of 936,000 Fit and CR-V models after it was concluded that the power window issue could “allow for residue from window cleaners to accumulate,” which can cause a fire. Aside from numerous complaints, there was also one death reported in South Africa due to the Honda defect.

As for Toyota, the new investigation comes a year and half after the automaker officially wrapped up their recall of 10 million vehicles worldwide, due to acceleration problems. Aside from the massive recall, the Toyota brand was further damaged due to the $50 million they were ordered to pay the NHTSA for not reporting the acceleration issues in a timely manner. Toyota has stated that the company is aware of the current fire investigation and will "fully cooperate with the agency in its efforts investigate the allegations."

Stay tuned for more information as the investigation unfolds.

Craig Collins wrote on February 18, 2012 - 1:29am Permalink
How would you know if your car might develop a possible fire inside the driver side doors.What can my dealer do to help me be reassured that my car is not one of the cares that could be a fire hazard?

LG's New EV Battery Plant Is a Welcome News for Tesla
Tesla Giga Berlin's New Hurdle: It's Not Only the Gov't, but Now Tesla Itself
END_OF_DOCUMENT_TOKEN_TO_BE_REPLACED