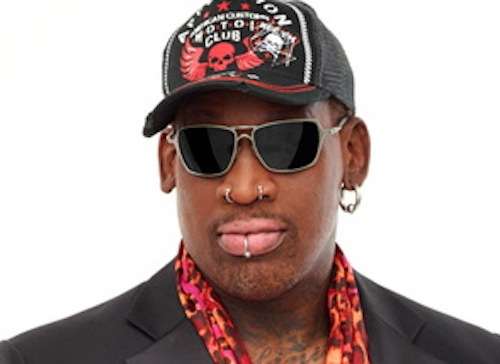 Dennis Rodman rides around the Vatican in custom Mercedes-Benz Popemobile

Rodman was in Rome today to campaign for Cardinal Peter Turkson of Ghana, who would have been the first black pope.
Advertisement

Just over one week after Dennis Rodman made headlines for his trip to North Korea, the Basketball Hall of Famer is once again in the news. This time around, Rodman is garnering attention for his ride through Rome earlier today in a customized Popemobile. What was “The worm” doing in Rome one might ask? The former Chicago Bulls star was in Vatican City campaigning for Peter Turkson, the cardinal from Ghana. Unfortunately, Rodman’s pick for Pope did not make the cut, but the flamboyant reality star received much attention nevertheless.

Although many journalists may have wondered why Rodman was in Vatican City, his appearance was not nearly as baffling as his trip to North Korea late last month. During his visit, the basketball diplomat watched a basketball exhibition game with North Korean leader Kim Jong Un and later reported he and the unpredictable communist leader are now friends. On Monday, Rodman revealed that he plans to return to North Korea in August to vacation with Kim.

Aside from Pope Benedict’s everyday Popemobile, the Pope Emeritus was also the proud owner of an all-electric Popemobile given to him by NWG auto. NWG founders Francesco D’Antino and Antoine Rainone donated the car, which was the Vatican’s first electric vehicle. The donation event was presided over by Father Federico Lombardi and included a blessing of the car and a prayer to St. Christopher, the patron saint of travelers.

While Rodman may have grabbed some headlines, the real news of the day was the election of Cardinal Jorge Bergoglio of Argentina as the first non-European pope in the modern era. Cardinal Bergoglio, who will be known as Pope Francis, is the first pontiff to hail from South America, and the first Jesuit elected to the head of the Roman Catholic Church.

Bergoglio, 76, was born in Buenos Aires on December 17, 1936 and is the son of an Italian immigrant. Bergoglio was ordained by the Jesuits in 1969 and became archbishop of Buenos Aires in 1998. He rose to cardinal in 2001 and served as Argentine Bishops Conference President from 2005 to 2011.

Patrick Rall wrote on March 14, 2013 - 12:03am Permalink
Rodman is nothing more than a washed up pro athlete...i dont know why anyone recognizes him as any more than a disease ridden circus sideshow. The US government should wait until he goes on one of his little trips to hang out with some foreign dictator and when he tries to come back into the US - they should refuse him entry. One less piece of trash in this country.