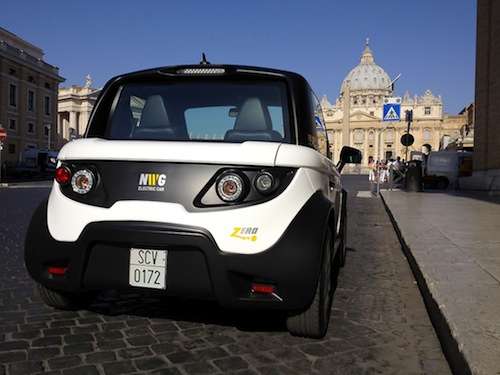 The vehicle was given to the Pope by NWG in a ceremony late last month.
Advertisement

Move over old popemobile, because the NWG auto company has given Pope Benedict XVI the Vatican’s first electric vehicle. Francesco D’Antino and Antonio Rainone, the company’s founders, presented the car to the Vatican late last month. The event, which was presided over by Vatican spokesperson Father Federico Lombardi, included a blessing of the car and a prayer to St. Christopher, the patron saint of travelers. The EV contains a Vatican City State license plate and features and costs approximately $2.50 to recharge it battery.

The Pope’s new car is just one way in which the Vatican is showcasing its reverence for the environment. “The Vatican naturally should carry out all of its activity in a coherent way that respects creation. These energy-saving structures are slowly being developed, with renewable energy,” Fr. Lombardi added.

Pope Benedict XVI has called on all countries to coexist with the environment since he was elected to the papacy in 2005. Specifically the Pope has urged everyone to “cooperate responsibly for the sake of the planet’s future so that the poor nations are not the ones that have to pay the biggest price for climate change.” Interestingly, the Vatican even began using solar panels on the roof of the Paul VI Hall in 2008.

As for the Pope’s new vehicle, it is a NWG Zero, an all-electric vehicle that was launched three years ago. Entirely made in Italy, NWG describes the Zero as the “ultimate city car with zero emissions.” The vehicle is known for its fluid and comfortable driving style, which does not require gear changes. Although it is a small vehicle, the Zero holds the road exceptionally well and can handle extreme heat, ice and snow. Additionally, the vehicle boasts a 75-mile electric range on a single charge. The Zero’s range is more than suitable for driving around Vatican City, which is one-fifth of a square mile.

The Vatican was previously in talks with Mercedes-Benz about creating a hybrid popemobile, but it never came to fruition. Pope Benedict’s former popemobile was a modified Mercedes-Benz M-Class SUV with a special glass-enclosed area for the pontiff.