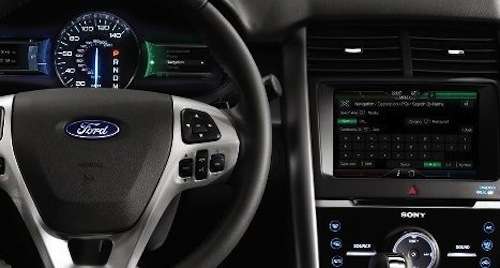 Remember last year's indictment of the MyFord Touch system by Consumer Reports? Well, they're back for round two.
Advertisement

It’s no secret that Consumer Reports detests MyFord Touch, an in-car entertainment and communication system developed by Ford and Microsoft. Some might remember last year’s article in which CR called the MyFord/MyLincoln Touch system “overcomplicated and distracting.” As if that piece was not damning enough, the product review site has just published a report detailing just exactly what makes the system so poor.

Prior to delving into the negatives, which there are plenty of, CR does commend MyFord Touch for its attempt at creating an innovative system. While other touch systems employ conventional knobs or buttons, MyFord Touch uses compactive switches, a large center touchscreen, steering-wheel controls, and voice command. Unfortunately, CR argues that its controls are complicated and difficult to use. Even the most common controls like climate and audio adjustment can be a chore to figure out, says CR.

CR goes as far as presenting a bulleted list of flaws with the MyFord/MyLincoln Touch system. First up are the touch-sensitive buttons on the MyLincoln Touch system, which are “maddeningly fussy” and “hard to distinguish.” Even after users figure out how to identify the right spot to touch, it usually has to be pressed multiple times before registering, according to CR.

Aside from being difficult to operate the MyFord/MyLincoln system are also inconveniently located in multiple models, including the 2013 Ford Taurus, 2013 Ford Escape, and 2013 Lincoln MKS. The fact that system is often out of reach seems to contradict the whole “touch” concept, contends CR. Since the system is far away, its small fonts are hard to read, which makes quickly identifying options nearly impossible.

If you are able to make contact with the touch system, radio stations are often accidentally changed when your fingers attempt to turn the volume knob. Additionally, the “slider” feature on MyLincoln is difficult to fine tune and take hold of, CR argues.

As for the system’s voice command system, CR admits that it is useful when it comes to phone and iPod-related endeavors, but less successful in terms of basic commands. “It feels like a Band-Aid for the car’s poorly designed physical controls,” says CR.

So how about the all-digital gauges? Though it may seem like a useful innovation, CR refers to the cluttered digital cluster as "overkill." CR argues that the gauge menus are overly involved and a nuisance. CR asks, "Do you need to see your fuel economy displayed with multiple bar graphs, selectable for every five, 10, or 30 minutes?" In the end, CR answers with a definitive "no."

Since last year, CR has tested six cars with MyFord Touch or MyLincoln Touch. CR claims its drivers are as acclimated with the system as can be, which makes its findings all the more alarming. CR also points out that its reviewers are not opposed to touch systems in general. In fact, CR has praised Chrysler’s touchscreen control system.

Despite all of its negative aspects, CR does commend Ford for its commitment to improve MyFord/MyLincoln Touch. Although multiple CR reviewers found the updated system rather slow and temperamental, the updated system is slightly more consistent overall.