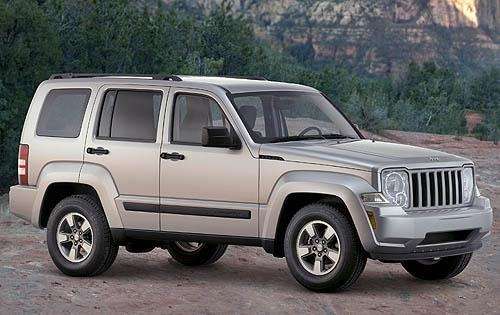 Chrysler is recalling nearly 80k Dodge Nitro and Jeep Liberty SUVs due to transfer case defect, which may cause drive shaft breakage.
Advertisement

Affected by Chrysler’s drive shaft recall are 78,500 model year 2007-2008 Dodge Nitro and 2008 Jeep Liberty 4x2 SUVs manufactured between March 2006 and March 2008. The vehicles in question may be equipped with a faulty transfer case heat shield, which may drop down and rub against the drive shaft. As a result, the drive shaft may weaken and possibly break.

Consequently, the broken drive shaft may strike the transfer case tunnel, leading the airbag computer to believe that a crash has occurred, thus deploying the airbags. Drive shaft failure may also result in a loss of motive power. Either condition may increase the likelihood of a crash, according to the National Highway Traffic Safety Administration. Chrysler is unaware of any crashes or injuries, but has received 38 complaints pertaining to broken drive shafts.

The recall does not affect SUVs equipped with 4x4 drivelines since the transfer case is longer. The longer transfer case stops a dropped shield from resting directly on the drive shaft.

Chrysler will notify customers of the recall beginning in May 2013. Authorized dealers will add a bracket to support the heat shield at no cost to the owner. In the meantime, customers may contact Chrysler at 1-800-247-9753. Chrysler’s recall campaign number is N10. Concerned owners may also contact the National Highway Traffic Safety Administration’s Vehicle Safety Hotline at 1-888-327-4236 or visit www.safercar.gov. The NHTSA campaign number is 13V121000.

The six recalls – coupled with four others issued earlier this year – put Chrysler’s recall count for 2013 just three shy of last year’s entire total. In 2012, Chrysler’s 13 recall campaigns covered 1.3 million vehicles, which was less than the other Detroit Three automakers.

James Bates wrote on March 10, 2014 - 5:56am Permalink
Good Day ! I own a Dodge Nitro RXT 2007 model. The drives shaft is also affected by this recall. How can I go about getting this drive shaft replaced as stated above. Your response is appreciated. [email protected] 072 686 6701
Pam wrote on November 24, 2014 - 11:26pm Permalink
Thus happened to my 2007 Dodge Nitro. My coworker and I. We're sitting at a light and when I pressed on the gas there was a loud explosion and my sir bags deployed! I checked to see if the person behind had hit me, but they didn't and we jumped out the car, because at the time I had NO idea eat had just happen. IT was very traumatic and my insurance Fred Loya at the time was NO HELP. I'm glad they finally are owning up that something was wrong! PAM Houston Tx.
Paula Draughan wrote on July 21, 2016 - 11:18pm Permalink
I brought an Nitro 2007 with no warranty and the drive shaft on my truck went out about an month and a half after my purchase and I understand that the recall was very year's ago but I wanted to know if this is from wear and tear on driving or does my truck qualify for the recall.