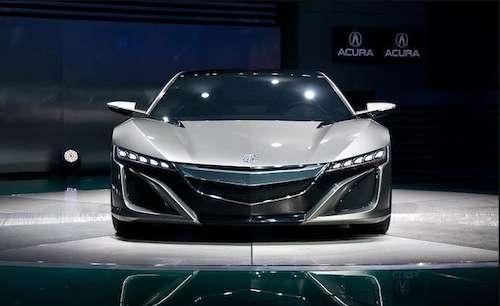 With Father's Day in mind, Acura has a novel gift idea in mind for all you dads out there.
Advertisement

With Father’s Day just one day away, many of you are probably scrambling to find the perfect last minute gift. Well, the folks over at Acura are more than willing to help you narrow down your search. A new post on the automaker’s Facebook page tells readers: “If you need a last minute Father’s Day gift, just write him an IOU for an NSX!” The phrase “IOU” is present in the post because the Acura NSX is currently only a concept vehicle. In fact, production on the NSX is not expected to begin until 2015. So if your father doesn't mind waiting a few years, start saving.

Despite the fact that receiving a brand new luxury car for Father’s Day may be a long shot, that isn’t stopping the dads from commenting on Acura’s Facebook page. Fathers on Facebook agree that the NSX would be the perfect gift on their special day. So far the consensus appears to be that the majority of Facebook fans want their NSX in black.

Although the NSX isn’t expected to his showrooms for several years, Acura has already began heavily promoting it. The luxury coupe concept made its debut back in January at the 2012 North American Auto Show. Shortly thereafter, Acura launched a popular ad promoting the NSX, which debuted during the Super Bowl XLVI broadcast. The commercial spot features comedian Jerry Seinfeld, who is second on Acura’s waiting list for the NSX. Seinfeld then spends the remainder of the ad trying to bribe the individual who sits atop the NSX waiting list. Check out the commercial below.

Aside from having a commercial for the NSX featured on the most-watched television event in history, the upcoming sports car was also highlighted in this year’s blockbuster The Avengers. The vehicle was prominently shown on screen during the film’s conclusion as Tony Stark aka Iron Man jetted off into the sunset. Stark, played by Robert Downey Jr., previously drove an Audi R8 in the previous two Iron Man films. The Avengers enjoyed the biggest opening weekend ever and tied the record for the quickest film to gross $1 billion worldwide. It is currently the third highest-grossing movie ever and still climbing.

The Acura NSX concept is a two-door coupe, mid-engine VTEC V6 vehicle with an all-wheel drive system. The NSX’s SH-AWD system contains one electric motor in a dual-clutch transmission, creating a hybrid setup. Acura also plans to develop a GTE racing version of the NSX to compete at the 24 Hours of Le Mans starting in 2015.

Also read: Humvee from 'The Avengers' for sale on Ebay