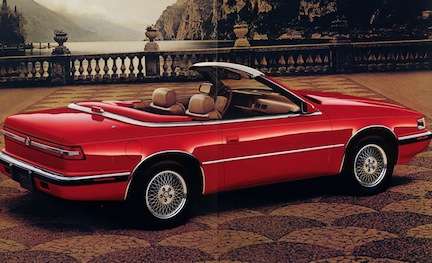 Chrysler may revive TC by Maserati

Though the Chrysler TC by Maserati was a financial failure in its brief three-year run, Chrysler may give the car another chance.
Advertisement

Although the original Chrysler TC by Maserati sold just over 7,000 units in three years of existence, Fiat-Chrysler believes that now may be a good time to revive the Italian-designed two-seat convertible. Reports indicate the revival may be likely due to the fact that Fiat-Chrysler and Maserati are now corporate cousins. Full details of the upcoming venture will be published in the April edition of Car and Driver. The auto magazine has listed the TC by Maserati as one of its “25 Cars Worth Waiting For” and states that the revamped TC by Maserati will likely debut in 2014.

The TC by Maserati originated due to the friendship between Lee Iacocca, former President and CEO of Chrysler and Alejandro de Tomaso, former owner of Maserati. In 1984, Chrysler and Maserati signed an agreement to create a sport coupe, which became known as the TC. Aside from the partnership on the TC, Chrysler also served as an investor in Maserati in the 1980s.

The TC was based on the Dodge Daytona platform, except for the 2.2-liter “Maserati” engine. The 2.2-liter engine was replaced by a Mitsubishi-sourced 3.0-liter V6 for its 1990 and 1991 model years. Style-wise, the TC featured a detachable hardtop with opera windows and a manually controlled cloth lined convertible top. The optional exterior colors were yellow, red and cabernet upon introduction. Cabernet was dropped in 1990, replaced by black and white. The TC also came standard with a hand-stitched Italian leather interior. Despite the hype, the TC by Maserati was poorly received upon release due to its strikingly similar appearance to the Chrysler LeBaron GTS, which cost much less.

Although unconfirmed, the upcoming TC by Maserati will cost approximately $35,000 and will be powered by a 0.9-liter two-cylinder, turbocharged engine from Fiat with 87-hp. Fiat’s 0.9-liter engine was the recipient of the 2011 International Engine of the Year Award and comes standard on the Fiat 500. Car and Driver contends that the all-new TC will be based on the 2013 Dodge Dart.

Stay tuned for more information about the TC by Maserati, as Chrysler will likely respond to the Car and Driver piece.

Autojunkie wrote on March 7, 2012 - 12:07pm Permalink
You know this was an April Fools joke that Car and Driver made up, right? There is no such "TC revival" in the works what-so-ever.

Tsingshan's Threat to Tesla: EV Maker Is In Battery Crosshairs
Tesla-Funded Research Reveals One of The Biggest Mysteries of EV Battery
END_OF_DOCUMENT_TOKEN_TO_BE_REPLACED