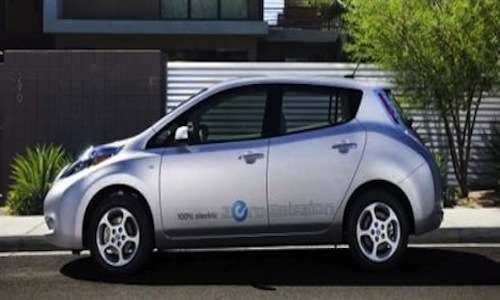 Consumers will find several fresh bells and whistles when the all-new 2013 Nissan Leaf hits dealerships this December. The Detroit News reports that the upcoming Leaf fill feature leather seats, a darker interior and a more efficient heater. Notwithstanding the soon-to-be released Leaf, Nissan is already enjoying notable sales figures for 2012. Mark Perry, Nissan North America's director of product planning and strategy, said that 2012 sales have put Nissan well ahead of last year’s pace. In fact, the Japanese automaker is on pace to double 2011 sales. What’s even more significant is that the Leaf only recently became available in all 50 states.

As for the new features on the 2013 Nissan Leaf, Nissan revealed that such ideas have been permeating since the Leaf was first designed five years ago. Although leather was considered on the initial Leaf model, Nissan was unsure as to whether customers wanted such an option.

The addition of leather seemed inevitable for Nissan, because GM’s Chevy Volt, a rival of Leaf, already offers a leather interior. According to Rob Paterson, GM spokesperson, nearly 75 percent of all Volt models sold or leased have leather. Nissan’s new leather option only serves to boost already impressive sales. Regardless Leaf's slight sales dip in February, Perry argues that Nissan will be selling upwards of 2,000 vehicles per month by the summer.

Despite the 2013 Leaf’s new interior options, the real sticking point for buyers may be the new heating system. The upgraded heating system is partly a reaction to a test by David Champion of Consumer Reports, which found that the current Leaf’s electric range dramatically decreased in cold weather. Perry contends that the 2013 Leaf’s heater will be "much, much more efficient" by comparison. The all-new Leaf is reported as having a more efficient heating system that could net drivers an additionally 20 to 25 miles in cold weather conditions.

Lastly, the new Leaf switches from the 3.3-kW charger to a 6.6-kW once that provides for some much needed improvement. The current Leaf charger lets drivers add roughly 10-12 miles of range per hour, while the new and improved charger nearly doubles the range in the same amount of time.