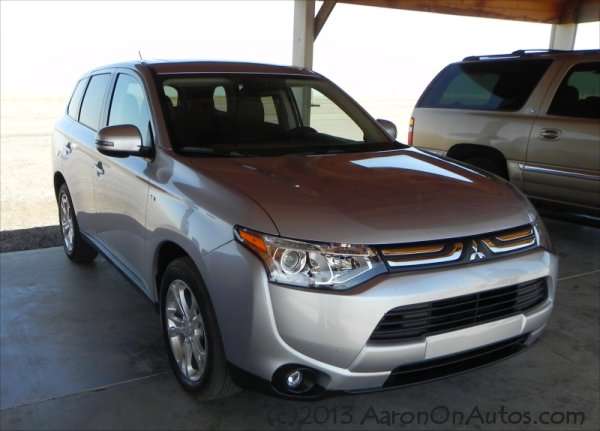 Will a top safety rating make the 2014 Mitsubishi Outlander a contender?

The beautiful, all-new Outlander plans to become market competition as Mitsubishi struggles for relevance in the American market. With its new Top Safety Pick+ rating from the IIHS, it may be able to pull it off.
Advertisement

The all-new, completely redesigned 2014 Mitsubishi Outlander has received a rating of Top Safety Pick+ from the Insurance Institute for Highway Safety (IIHS) in the wake of the best-selling Toyota RAV4 failing the test miserably. Do these indicate a larger trend in changes in the crossover-SUV market? Changes that could benefit Mitsubishi as the automaker struggles for relevance in the U.S. market?

At an automotive event that involved an offroad component last year, I had noted that in comparison to other models in the same price bracket - namely the Subaru Forester, Toyota RAV4, Nissan Murano, etc. - the Outlander was a limp punching bag. It was clunky to drive, had a low-quality interior feel, missed the mark on many ergonomic cockpit trends, and had badly-tuned offroad suspension performance.

A couple of months ago, I was able to drive a 2014 Outlander along with a 2014 Forester, a 2014 Mazda CX-5 and a 2013 RAV4 at an event that, while it didn't include an offroad element, did put all of them on the same road at the same time under about the same conditions. What did I learn?

I learned that Mitsubishi got serious about the Outlander for 2014. While it is still somewhat outclassed by some of the others, it is now at least a contender in the ring and able to stand on its own merits in several ways that it couldn't before. Most notably among those are the much nicer styling it sports, the better on-road ride, and vastly improved interior accouterments. It is also now one of the few 2014 models to have undergone crash testing and it came out of it looking awful good.

For Mitsubishi to make it in the U.S. market, a small, but enthusiastic car crowd is not going to cut it. But it does make for a great base to build on. The company's little street performers, especially the Lancer, enjoy a core popularity that is almost unrivaled in the market. Few in the automotive industry can claim to have such a rabid following of owners and enthusiasts - the one thing that set Mitsu apart from Suzuki, which recently bowed out of the U.S. auto market.

To translate that into sales growth, however, is not easy. Instead, Mitsubishi has to build on that base by offering vehicles in other classes to a broader market. Enter the Outlander, which competes in the fastest-growing market of all: family-sized crossovers that are not too big and not too small. This market, however, is full of welterweight contenders ready to deliver a KO to anyone who cannot hold their own. Until the 2014 model arrived, it appeared that they had put the Mitsubishi Outlander on the ropes and it was ready to go down to the mat in defeat.

The 2014 Outlander is an entry into that arena that shows that the company still has some scrap left and is willing to get up, dust off, and come out swinging before the ref finishes his count. With a beautiful new style that rivals the rest for its sleek looks and premium appeal, a price tag that isn't much larger than it was before, and an interior that has basically become completely new, keeping little of last year's model, the Outlander is ready for the next round.

Although it may not win, this underdog will at least put up a good fight and will likely finish the bout on a decision instead of down and out in a KO. Who knows? This could actually be the kind of comeback that legends are made of.