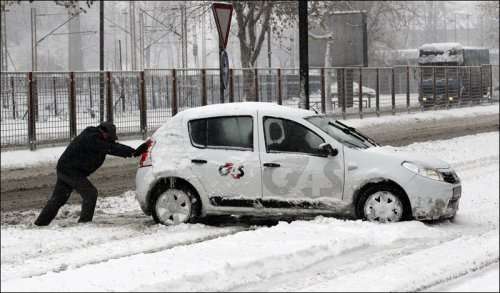 Ever wonder why it can be so hard to get a car started in the extreme cold? Find out here.
Advertisement

Ever had that sinking feeling when you get into your car one very cold morning, turn the key and it slowly.. slowly cranks and seems to take forever to start? Your heart skips a beat and you get ready to scream.. then it catches and starts. Whew!

The colder the winter climate where you live, the more often this will happen to you. Why do gasoline cars seem to have such a hard time starting up in the cold weather?

The answer will also tell you why people who live in very cold climates (think Alaska, northern Wisconsin, North Dakota, etc.) often have block heaters, even in their gasoline-powered cars.

Well, the reasons are simple.

First, Gasoline Evaporates Slower In the Cold
Like any other liquid, gasoline evaporates less the colder it is. Although it doesn't gel up like diesel fuel does in the cold, liquid gasoline doesn't actually burn - gasoline vapors do. This is why modern cars use fuel injectors - it atomizes (read: vaporizes) the gas by shooting it under pressure in a thin stream into the cylinder. This maximizes the surface area of the gasoline being exposed to air so that it will ignite more easily. In the cold, less gasoline will vaporize.

This is why most engines have a temperature sensor that does more than just tell the coolant (anti-freeze) when to flow to cool the engine down, but also tells the car's computer that the engine is cold or very cold and that more fuel will likely be needed to get it to start.

Second, Battery Chemistry Is Different In the Cold
The battery that stores power so that the starter can crank over the engine is a chemical storage unit that uses chemistry to store and release electricity. When it's cold, the chemistry in both lead-acid and lithium-ion batteries takes longer to react, which means less power is being produced in a given time period. The result is less energy being sent to the solenoid and starter, so it will turn slower. This is the physical manifestation of cold starting that causes our anxiety.

Finally, Oil Is Thicker In the Cold
This is not as big of a deal as the last two, but it does affect the engine's cold weather performance and has a big impact on the amount of resistance the engine gives the starter. Motor oil becomes thicker in the cold - the colder it is, the thicker and more viscous (sticky) the oil becomes. Most engines still use mechanical oil pumps to circulate oil around the engine, so the pump only works when the engine is turning (moving). When the engine is stopped, the oil will be pulled down by gravity into the lowest points it can find, which is usually the oil pan, but can also be nooks and crannies inside the engine as well.

Circulating lubricating oil is a big part of what keeps an engine running well, which is why it is usually still mechanically-driven, even on today's more electrically-controlled engines. If no oil is circulating, the engine will quickly kill itself as parts rub against other parts and break down. The thicker the oil, the harder the pump must work to circulate it. Further, the thicker the oil, the less it lubricates and the more it just gets in the way in a cold engine already struggling to crank due to low power going to the starter motor.

What You Need To Know
The good news is that in most of the U.S., the majority of gasoline car engines will have only marginal trouble starting on even the coldest of days. In some areas, though, added accessories like block heaters and higher output cold cranking batteries are recommended.