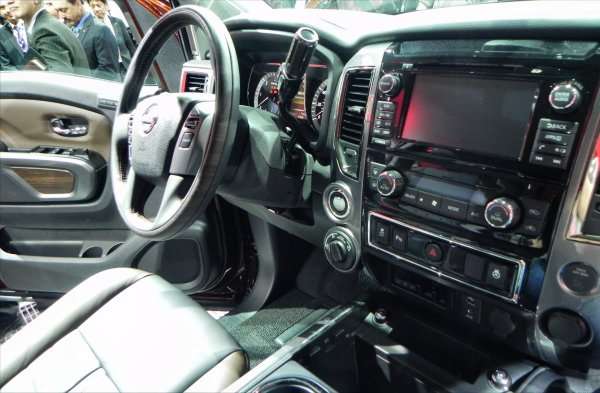 Why the 2016 Nissan Titan Doesn't Have a Floor Shifter

Nissan moved the shifter in the new 2016 Titan to the column. The reason why might surprise you with its Captain Obvious cliche.
Advertisement

One of the things we noticed about the new 2016 Nissan Titan XD when it was unveiled at the North American International Auto Show in Detroit last month was the fact that the shifter was moved from the center stack to the column. The move from a gated shifter to a column-mounted one intrigued us, but we had many, many other things to be intrigued by as well, so the question was put on the back burner. It is, after all, hard to get past the "555 lb-ft of torque" and constant questions by people in the industry about what anyone's going to do with all that power in a half ton truck.

Eventually, of course, we returned to the shift location question and found an answer.

The shifter was moved because market research showed that most truck buyers need three cup/container holding spaces. In what may be the most cliche, head-slapping moments ever, Nissan's research found that the modern day truck owner needs a space for a sports drink, a water, and a cup for spitting their chew juice into.

No joke. Nissan called it "chewing tobacco spittle," but it's chew juice. That nasty byproduct of an even nastier habit.

If that doesn't set back pickup truck appeal, I don't know what will. If the average buyer (this means a big enough portion of them that designers are catering to them) needs a place to put their chew spit, then Ford's strategy of marketing the F-150 to soccer moms may be about to fall apart and the days of the big time executive driving a fat Cowboy Cadillac pickup might be ending. Or maybe this is just a cliche and the number of chewers is mostly relegated to the low-end buyers who use their pickup trucks for actual work - like on the job, everyday, scratchin paint and haulin freight.

After having driven a 2015 BMW with working cigarette lighters and an ashtray in it (real throwbacks in today's cars), I wondered if someone in Bimmer's market research group found that most BMW owners smoke filterless cigarettes and eat bratwurst and say a lot of words that end in "hr." Which, for all I know, may be the truth.

Brandon D wrote on February 18, 2015 - 5:28pm Permalink
Column shift is the best style for trucks. i will only buy a truck with column shift. I work for a living with my trucks so i am a bit different. Plowing snow with column shift is the only way ill do it. In a city, doing driveways, in heavy traffic... Nothing beats column shift automatic. nothing beats a normal key either. key fobs and floor shift is the opposite of what i like in a truck!
Lonnie Wimble wrote on February 19, 2015 - 8:11am Permalink
I owned two Titan's with the gated shifter and I loved them. Nothing beats the ability to slide in the gate when you need a little more control of your transmission. That being said, I now own a 2014 Ram and it has the rotary transmission knob, and I like the additional space that has been freed up.
Dave wrote on October 17, 2015 - 1:16am Permalink
Column shift is a better approach it frees up space, as well as puts the shifting where you want it for tow and plow jobs. It is by the far the most durable /reliable way to shift the transmission linkage wise. .