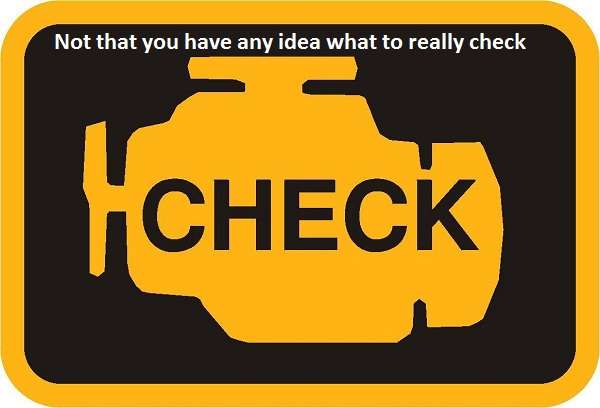 The check engine light and the sensors and components that are behind it have become more and more sophisticated as technology improves. Except for one thing: the light itself is an uninformative relic that hasn't changed much in decades.
Advertisement

We've all been there at one time or another. Driving along, happily minding our own business, and then the dinging sound followed by the dreaded "Check Engine" warning light. It's the universal symbol of automotive doom and gloom.

It could mean that it's time for an oil change. Or maybe it's to inform you that a sensor has gone bad. Perhaps the gas cap got left off again? It might be the pesky O2 sensor finding something wrong with your mix. Maybe there's a serious transmission issue about to explode in a three thousand dollar eruption of repairs.

Who knows? It's not like that worthless engine light will actually tell you.

No, in order to find out what the cryptic engine check light means, you'll have to find a mechanic and have the OBD II trouble code read. Often at a price. Maybe you'll have the light checked only to find out it's a $40 oil change or maybe you'll have it checked and find out it's a "go wreck your car to collect the insurance 'cause this repair will cost more than it's worth" kind of thing. (Not that we would recommend doing that, but Larry the Cable Guy likes the idea.)

The check engine light is like a preliminary diagnosis for erectile dysfunction. You don't know what the problem is, but assume the worst. The difference is that the ED is only going to affect three minutes of your life every week. A dead car could be years of new car payments or credit card bills thanks to multiple trips to the mechanic to figure it out.

In today's day of high-tech in-car electronics, with stereos that read text messages to us and mobile WiFi hotspots in our car, it's a wonder that the aged, uninformative check engine light still exists at all.

Consider this: the Volkswagen Beetle Turbo Convertible I'm test driving as a press loan this week has the capability of synching with my phone to stream music from Pandora, lets me select whether I want the Sirius radio tuning to appear on the big center console screen or on the "heads up" in the center of the instrument cluster. It can open the roof at the touch of a button, make phone calls with my merely announcing who I want to call, and allows me to configure the output screen to show any amount of information about the car's operations or economy. Yet were the check engine light to come on, that is the extent of the information it would give me.

The light is on. Commence panic.

As a do-it-yourself maintenance mechanic, I'm familiar with the light and what it can mean versus what it usually means. The assumption (if you're smart) is that it's the worst it could be. Simply because, given the information-lax nature of the light itself, you can either assume the problem is bad and stop driving immediately or keep driving and hope it's just some stupid little thing. That's a double-edged sword, though, because you're gambling either way.

If it's no big deal, but you stopped and called a tow (whether professional or a buddy with another car and a rope), you've wasted time and money. If it's a big deal but you didn't stop, you're car may become so much seized up metal for the recycling bin.

The rule of thumb is: "The engine light just came on. Good luck, sucker."

Often, the light means nothing more than a loss of pressure in the EVAP system, which generally comes because the gas cap is not sealing properly. Or perhaps one of the oxygen sensors is reading a bad exhaust mix, indicating too much fuel or air going into the chambers. Neither of these are life-threatening to the car and are the most common engine light triggers to be had.

Yet the same light could mean that there has been a loss of oil pressure, the transmission is losing time, etc. These are bad things that will only lead to worse things if not immediately addressed.

Why is it that with all of the gadgets and gizmos in today's vehicles, we can't have one of the many LCD screens appearing therein display the engine code's meaning? They're universal, after all, as they all follow the OBD II standard. A non-mechanic should not have to own an OBD scanner just to know whether or not his or her vehicle is about to explode like a car in a Hollywood action sequence.

If the car can inform me that pressure in one of my tires is low, it can just as easily inform me that my gas cap is probably not screwed on right. What's stopping them?

Universally called the "tell-tale", the check engine light is.. you guessed it.. federally mandated through the National Highway Traffic Safety Administration under Federal Motor Vehicle Safety Standard 101. Ahh, that explains it.