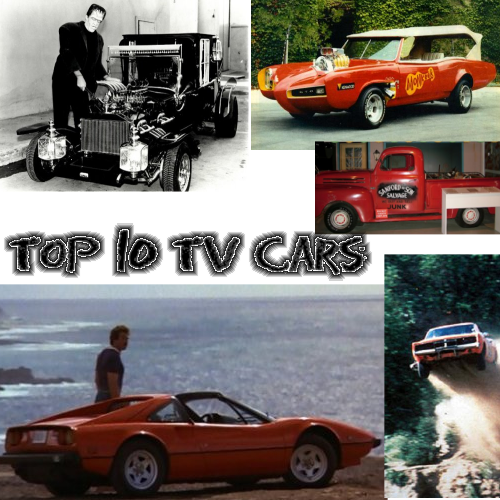 Just as in the movies, the cars we see on television are often the star or best supporting actor in the show. Here are the top ten picks for best TV cars from Torque News.
Advertisement

Earlier this week, we published our Torque News' Top 10 Movie Cars list, which detailed our top picks for vehicles from the movies. Now, here are the top 10 cars from TV according to the Torque News staff.

These are, obviously, North American-centric as that is our audience here at Torque. There are some surprises from international shows which became popular in the U.S. and Canada, though, so keep your eyes open.

#1 – Batman (live action) / 1955 Lincoln Futura concept
The car that made the iconic television series starring Adam West started life as a 1955 Lincoln Futura concept car in 1954, built by hand at the Ghia Body Works in Italy and debuting at the 1955 Chicago Auto Show. It then was parked, but stayed in the minds of Hollywood dreamers who gave it its first film role in 1959 in the movie It Started With a Kiss alongside Debbie Reynolds and, appropriately, Glenn Ford. Then it was heavily modified into the machine we all know and love by George Barris as a last-minute replacement for a Cadillac in the upcoming Batman live action TV series. It also appeared in the spinoff movie and is now reputed to be worth $2 million.

#2 – Dukes of Hazzard / 1969 Dodge Charger
Probably the most-recognized TV car of all time, rivaling even our #1 pick, is the General Lee. With its bright orange paint, "01" on the side, Confederate flag rooftop, and a horn that plays Dixie, the Lee was to epitomize outlaw cars driven by the "good guys" for years. The TV series (affectionately dubbed "The Daisy Show" by more intelligent fans) ran for seven years. During that time, an estimated 256 Chargers were made into General Lees for various stunts, wrecks, smash-ups, etc. The show was known for its spectacular car jumps and aerials and film crew recollections say that nearly every one of those resulted in a car no longer usable. Every car used, however, was a 1968 or 69 Charger with the exception of radio controlled miniatures in some later episodes, which cast members almost universally say contributed to the decline in the show's appeal.

#3 – Green Hornet (live action) / 1966 Imperial Crown
The Green Hornet live action television show aired for only one season, but immediately became a cult classic for two reasons: it co-starred Bruce Lee and the unforgettable Black Beauty. Some other guy who owned a newspaper or something was also in the show. The car that launched Lee's career was a 1966 Imperial Crown. Two of them were actually modified for the show and both still exist, one in a private collection in South Carolina and the other in the Petersen Museum collection. The Imperial nameplate was a Chrysler-owned company and the Crown was likely their greatest achievement in design, rivaling the best that many European luxury makers had to offer.

#4 – Knight Rider / 1982 Pontiac Trans Am
When Knight Rider debuted in 1982, it had one thing going for it. Despite starring David Hasselhoff, it featured a high-tech car by the name of KITT. The show explained Hasselhoff with a story about being shot in the face and the car as a Knight Industries Two Thousand developed by a secretive public justice organization. Both totally believable and making for enough excitement to make a four year TV run. The 1982 Pontiac Trans Am used in the series cost an estimated $100,000 to build. All but five of the 22 cars made for the show were destroyed. Two (one "hero" and one stunt) are owned by Universal Studios, two are in the possession of a private collector in the U.S., and the last is in private hands in the United Kingdom. The "Hasselhoff" cars were reproductions made for his singing tour (he's popular in Germany) and have also been sold to collectors.

#5 – The Munsters / Munster Koach
The car has a storied career, but the most-remembered is the original from the series, which first aired in 1964. The Koach was designed by Tom Daniel for $200 and built for an unknown sum from 3 Ford Model T cars on a custom, hand-made frame. The scrollwork on the car alone took 500 hours to roll. The engine in the Koach is a 289ci Ford Cobra with a lot of racing modifications. The car now resides in a private collection. The other car in the series was the DRAG-U-LA, which was built from an actual fiberglass coffin and later inspired the White Zombie song of the same name.

#6 – Magnum P.I. / 1979+ Ferrari 308 GTS
This long-running and popular television series starred Tom Selleck living the dream life as a private investigator in Hawaii, all on someone else's multi-million dollar dime. Interestingly, the iconic car featured in this popular TV series was Ferrari's lowest-end car at the time and it replaced the Dino (featured in our #10 choice). The targa-topped 308 GTS was introduced in 1977 and one new car was given to the show each season with the outgoing model auctioned off after filming. In the 1981 season and on, the Quatrovalvole version of the GTSi was used in the show.

#7 – The Monkees / 1966 Pontiac GTO
The Monkeemobile is a highly modified 1966 Pontiac GTO, which includes a third row of seating, a T-bucket-type convertible top, a rear-mounted parachute, and more. Two of the cars were made, one for the show and one for promotions. They were made together in only four weeks. In testing, the original blower setup for the engine was removed and replaced with dummies because it produced too much power and made the car unsafe. The two cars are not exact copies, however, and can be differentiated by differences in their door logos and the fan belt cover styling. The first ("TV") car was left in Australia after a promotional tour and wound up in Puerto Rico where it was sold at government auction and is now a part of the Petersen Automotive Museum. The second ("show car") has been changed several times from its original and is in Michigan under the care of a private collector who purchased it at auction in 2008 for $360,000.

#8 – Starsky & Hutch / 1974-1976 Ford Gran Torino
The Striped Tomato was universally disliked by the two starring cast members of the show for various reasons, with star Paul Michael Glaser often deliberately smashing it into set pieces during filming. The pilot season featured two 1975 351 Windsor V8-powered 2-door Gran Torinos and subsequent seasons had varying models from the 1974 to 1976 Gran Torinos, some used as stunt vehicles, others as "show" vehicles for close up and other shots. Nearly all of the engine sounds you hear in the show are added in during post-production and are not original to the cars. The S&H car has seen several authorized replicas made for various markets, including Ford's 1976 Starsky and Hutch Replica Gran Torino, building 1,001 units. During the last season of the show, one of these factory replicas appeared in the first episode of The Dukes of Hazzard as a snub from rival network CBS. The original "#1" Starsky & Hutch Gran Torino is in a private collection.

#9 – Sanford and Son / 1951 Ford F1 4x2
The show credited with finally knocking The Brady Bunch off the air, Sanford and Son was an iconic comedy show and deserved its position on Time Magazine's 100 Best TV Shows of All Time. Of course, most credit Redd Foxx for this, but in reality, it was the quietly patient, poignant work of his main co-star, a 1951 Ford F1 4x2 that really cinched it. The truck featured often in the show and was a largely unmodified and undressed '51 Ford. After the series ended in 1977, the truck was sold and passed through several hands before ending up in the possession of a real-life junk dealer in Indiana, who wrecked it in 1997. It was then restored and is owned by a private collector.

#10 – The Persuaders / 1971 Ferrari Dino 246 GT and 1971 Aston Martin DBS
Driven by Tony Curtis and Roger Moore respectively, these two cars were highlights of this one-season show, which itself was a spinoff of several other popular shows of similar bent at the time. British television was peppered with "super spy" shows in the 1960s, including the highly popular The Avengers, elements of which heavily contributed to The Persuaders. The show had lackluster popularity in the U.S., but was a relative hit in Canada and the UK. Not long after the pilot season crashed, Moore would re-appear to take the world by storm as James Bond.

Those are our picks for favorite TV cars. Got one of your own? Let's hear it!

Nicolas Zart wrote on August 10, 2012 - 5:12am Permalink
Two of my favorite childhood goodies, The Munsters, Munster Koach and the Ferrari 308 GTS, the lighter fiberplastic body and carburated! Seriously, how much cooler does it get than the Munster Koach when you're a kid?