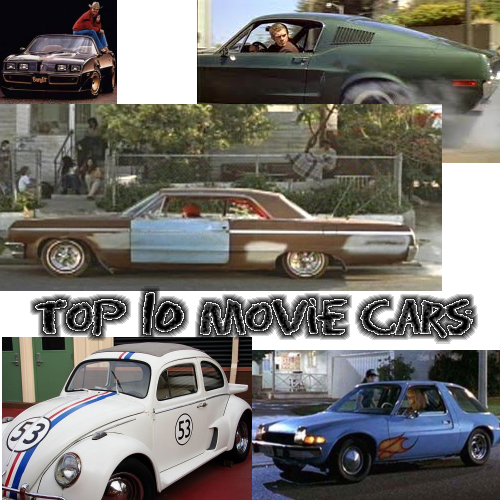 The vehicles we see in movies and on television can come to define the film or even the vehicle itself. Often, even those who aren't "car nuts" will remember a show because of the car that was in it. Here are the top ten picks for movie cars from the Torque News gang.
Advertisement

Chances are, you've seen movies that had a car in them that you couldn't forget. Sometimes, the car is the star of the show, sometimes it's such a stellar supporting actor that it deserves an Oscar. Whatever the case, these cars make their mark and can themselves define the movie for many of us.

Here at Torque News, we discussed our favorite vehicles of film and screen and came up with two lists, one for movies and another for television. Here are our Top 10 Movie Cars. Got a favorite not on this list? Be sure to comment below and tell us about it!

#1 – Back to the Future / DeLorean DMC-12
This is one car that probably would have largely faded into obscurity and been forgotten had it not been for the Back to the Future film series which also largely defined the persona of its star, Michael J. Fox. The DeLorean was, by and large, the film's most immediately identifiable icon and few can see a DMC-12 at an auto show or on TV without quoting the movie. "88 miles per hour", "Flux Capacitor" and "1.21 GIGAWATTS!" have become as intertwined with DeLorean as the gull winged stainless steel car has become to the film franchise.

#2 – Mad Max / 1973 Ford XB Falcon Hardtop
The Ford Falcon was littered throughout the Mad Max films with several different characters in the movies driving versions of the popular Australian-only pony cars. The car most associated with the movie, however, is the 1973 Ford XB Falcon Hardtop called a Pursuit Special, a limited GT351 version of the '73 Falcon built for Australian police forces. It received heavy modification for the movies, of course, but appeared in both Mad Max and Mad Max 2. It is now in the Denzer museum in Miami, Florida.

#3 – Batman (1989) / Batmobile
Although the Batmobile has seen many renditions over the years, from a fairly nondescript 1930s coupe to the iconic 1960s roadster with its huge fins and red-on-black motif. In movies, however, the black, jet-propelled, finned machine from the 1989 Batman film starring Michael Keaton (and then re-appearing in the follow-on, Batman Returns) defines the movies. New renditions of the vehicle in more recent films have failed to capture the kind of public imagination that the sleek road machine with its huge intake and powerful fenders of the Keaton films did. It's one of the most-reproduced Hollywood -invented cars of all time.

#4 – James Bond / 1963 Aston Martin DB5
This car was the Bond car and appeared in no less than six of the films in this franchise and was dubbed "the most famous car in the world" at the 1964 New York World's Fair. Sadly, the original DB5 from the early films was stolen in 1997 from its owner in Florida and has never been recovered. Perhaps the plot for a new Bond film? The Bond DB5 is making a comeback, appearing in this year's release of Skyfall - the latest in the James Bond franchise. Nicholas Zart also wanted to give honorable mention to the Toyota GT2000 Open-Top that appeared in You Only Live Twice starring Sean Connery. The special convertible was made, by the way, because Connery was too tall to sit in the coupe.

#5 – Bullitt / 1968 Ford Mustang GT390 Fastback
The '68 GT390 defines this film and is defined by it in a way that few can remember the movie (or even Steve McQueen, for that matter) without thinking of the car. When you see a '68 Mustang Fastback at a car show, you immediately think of the film as well. The chase scene in which the Mustang features is nearly 11 minutes long on-screen and is, for most, the very definition of a great car chase in Hollywood film. Amazingly, the two GT390s used in the film were on loan from Ford and the "bad guy" cars were originally to be Ford Galaxie sedans, but these were too heavy to put through the planned dramatic jumps on San Francisco's hills and were replaced with the iconic bad guy car, the Dodge Charger 440s.

#6 – Herbie (Love Bug #53) / 1963 Model 117 VW Type 1 Beetle
This movie had that rarest of things: a car that actually was the movie's star, appearing in no less than seven films, all with the car's name as the title lead. The one pictured in our gallery is from the latest film, Herbie: Fully Loaded and shows the iconic look of this most recognizable of Volkswagens. Sadly, in real life, Herbie would have made a horrible race car. But hey, we're talking about movies here! Even in film, something like the speed-negative VW Bug can become a race legend.

#7 – Cheech & Chong Up In Smoke / 1964 Chevrolet Impala
The Love Machine (not to be confused with Herbie) entered Up In Smoke during the title sequence which highlighted the car along with the iconic stoner cruising song, Low Rider by War. The film was, to say the least, controversial on its 1978 release, but has since become a definitive cult classic despite it's massive box office success and multiple spinoff sequels. The Impala is driven throughout the film up until it is swapped for the modified walk-in van made out of "fiberweed" that finished the movie on a high note.

#8 – The Graduate / 1967 Alfa Romeo Duetto Spider
The car is used throughout the film and became associated with both the film and its star, Dustin Hoffman, for its distinctive European styling despite being in an American film. The Spider happens to also be Alfa's longest-running production vehicle, being built from 1966 to 1993. The Duetto shown in the film was produced for only the first four years of the Spider's run. Hoffman's character, Ben, is a confused silver spooner and the Alfa is a perfect vehicle to emphasize this persona.

#9 – Wayne's World / 1976 AMC Pacer
In the movie that took the Pacer from "loser mobile" to "I can't believe Tea Carrera hangs out with a guy who drives this" mobile, the 1976 Pacer is likely the most-recognized car from the "rocker-centric" films made in the 1990s. The movies, in a way, created a new fan base of potential collectors for the much-maligned Pacer and the "blue with flames" look is probably the most-copied paint scheme for restored Pacers today.

#10 – Smokey and the Bandit / 1977 Pontiac Firebird Trans Am
With props to the 1977 Mack RS712LST in the film Convoy which inspired Smokey and the Bandit the Firebird showcased in the Burt Reynolds film is probably the most-associated "truckers car" of all time. The Firebird had one of the longest-runs as an American muscle car, starting in 1967 and (many believe) hitting its zenith in the late-70s models such as that showcased in this film. The "Bandit" car was a Special Edition, making this the most collectible of the second-generation Firebirds. The slant-nose look of this iconic film car only occurred for two model years (77-78). The third-generation of the Trans Am was KITT from the television series Knight Rider.

Well, those are our top ten movie cars. Got one of your own you think should be on this list? Let's hear it! Here are some honorable mentions from our staff that didn't make the list: