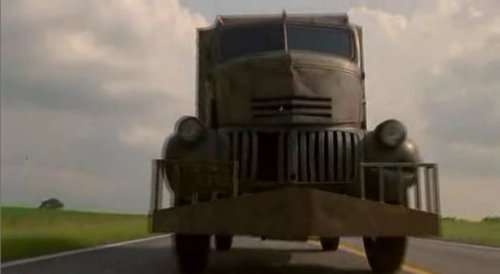 In movies and television, outlaws can be good guys, bad guys, or some of both. Often, they are defined by the cars they drive. Here's a top 10 list of cars from moving pictures that defined the outlaw in the show.
Advertisement

If you're like most Americans, then you love the movies and you've watched your fair share of TV. Whatever the medium, the storyline is always simple: a good guy is up against some bad guys and one or the other (or both) will be epitomized by their mode of transportation. The Lone Ranger had Trigger, Batman had the Batmobile, and Darth Vader had his TIE Fighter. Good guys, bad guys, or someone in-between, they always have a cool vehicle.

So here's the top 10 coolest outlaw cars in movies and television. The criteria are simple: the cars must be real (actually exist, not CGI creations), they must belong to someone who's not exactly working within the framework of the law (i.e. a "bad guy," a vigilante, etc), and the show must have been in English. With those rules in mind, here's the list:

#10 - 1983 GMC Vandura / 1987 Chevrolet G20 Custom Van, The A-Team
Driven by the ultimate vigilante crew, the A-Team, this van is about as recognizable as Hollywood vehicles can get. I remember as a kid, worshiping this show (I still know all the actor's real names) and thrilling every time BA Barracus' awesome Chevy flew onto the scene, defying bullets and rarely breaking itself on a jump or skid.

#8 - 1994 Ferrari 355, Goldeneye
No list of anything to do with movies is complete without a James Bond reference. Most of the time, Bond's bad guy nemeses drove the usual suspects in rich guy land yachts. In this movie, however, the 355 is pitted against Bond's little Alfa on a fun mountain-esque chase scene set in Monaco. Driven by a Bond girl, of course.

#7 - 2003 Nissan 350Z APS Twin-Turbo, The Fast & the Furious: Tokyo Drift
Driven by a bad guy with probably the lamest name in the history of movie bad guys, this little Nissan was unnecessarily tricked out for the movie and, in true to FF style, over-styled for the screen. In real life, this car is one of the most sought-after rice burners on the amateur racing circuit.

#6 - 1958 Plymouth Fury, Christine
The movie that launched Stephen King's move from novels to the big screen, this was a seriously freaky flick. The car took center stage, becoming the ultimate bad guy as it mirrored the revenge lurking in the main (title) character, waiting to explode into reality.

#5 - 1941 Chevrolet Cab Over Engine Van, Jeepers Creepers
The van is pictured as the title shot for this article and is one of the most evil creations out of Detroit to ever lay waste in a horror flick. Nobody will look at these classic vans the same after seeing this film. Wear diapers.

#4 - 1971 Lincoln Continental Mark III, The Car
Even creepier than the Chevy Cab Over in #5, this car was literally the star of the show in this horror flick. On top of that, the plot line was really, really cool and has amazingly not been copied and re-done 10 times over by today's "rip off the past, original ideas are for losers" Hollywood production crowd. I mean, they remade Footloose for hell's sakes. You know you're grasping at straws when you make new versions of that kind of crap.

#3 - 1998 Audi S8 Quattro, Ronin
This movie contains some of the best car chase scenes ever put to film and the pinnacle vehicle is the car chosen by the team's getaway driver, fitted with nitrous oxide power-boosters to add to the fun. Notably, every car chase scene in this movie (there are a lot of them) was filmed live with no CGI.

#2 - 1969 Dodge Charger, The Dukes of Hazzard
Of course, one number earlier than the '70, the '69 has a much cooler model year and thus is a much cooler "good guy outlaws" car. The Good Ol' Boys on the Daisy Duke Show made the most of this car, the General Lee. It's probably the most-recognized, iconic television car of all time. Everyone takes one look at the bright orange paint, the "01" on the side, and the Dixie flag across the top and they know this is the General Lee.

#1 - 1968 Dodge Charger R/T (aka 440), Bullitt
Of course, topping the list has to be the bad guy car from the single most awesome car chase action sequence ever filmed. When most people talk about this movie, they talk about Steve McQueen in his 1968 Ford Mustang, but the real stars were the 440s chasing him, which often had to slow down so as not to catch up too quickly, according to documentary accounts from stunt drivers in the film. Incidentally, Ford remade this scene in homage to the original, using a new Mustang in the Fox TV series Alcatraz, which aired last night.

So there you have my list of the top 10 outlaw cars from film and television. Honorable mention goes to the 1967 Shelby Mustang GT500 in Gone in 60 Seconds, which didn't make my list, but is worth mentioning because it was in contention.

Got a favorite? Tell me about it.

Don Bain wrote on March 27, 2012 - 2:17pm Permalink
How about the ultimate good guy gone bad in his Holden Monaro? Yes I'm talking about MAD MAX.
Aaron Turpen wrote on March 27, 2012 - 9:38pm Permalink
I thought about Mad Max, but he was a cop before the end times came and was basically a good guy for the whole show. Since there was no law, he wasn't really an outlaw. Maybe I should do a list of ultimate good guy cars? :)
Allen matkaiti wrote on January 3, 2020 - 9:51pm Permalink
I think you should add the wheels of terror 1974 charger with a grill that looks like it's always pissed off