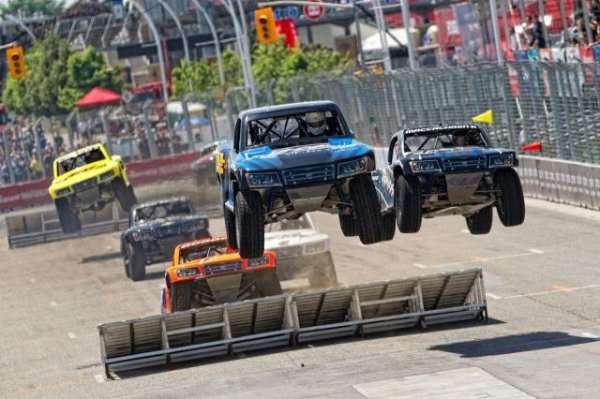 The SPEED Energy SST 2014 schedule has been announced, including ten race venues within North America and with more events featuring two rounds of competition for a total of 15 in the season.
Advertisement

The inaugural season for Stadium Super Trucks this year was a huge success and the SST series will be returning in 2014 with a new lineup of cities beginning on March 7 and running through November 7. Founder and well-known rally champion Robby Gordon says this year they plan on continuing to attract large crowds and growing the series into a bigger, more successful event.

“Having an opportunity to showcase these trucks last season at places like the Toyota Grand Prix of Long Beach and the Honda Indy Toronto was tremendously successful,” Gordon said. “Since then the outreach from promoters asking us to bring the SST series to their venues has given us all a great sense of pride and proves to us that we have a series that is exactly what it was designed to be – the most unbelievable, jaw-dropping form of auto racing in the world.”

One of the more popular elements of the SST race is that the trucks are all identical in performance and tuning with only the decals changing between them. So the race performance is entirely up to the drivers, making for a dynamic mix of changeups and surprising finishes. The championship was only narrowly won by Gordon this year, by a margin of a mere seven points, with second-place on the podium going to popular off-road series champion Rob McCachren and third going to NASCAR Truck Series race-winner Justin Lofton. These are only three of the big names in rally and truck racing to duke it out in the SST circuit this year. Names like PJ Jones, Sheldon Creed, Jarrett Brooks and more. All of whom took race wins this year. Most of the 27 world-class racers who were on the circuit this year will be returning for 2014 as well.

Races will begin in Las Vegas, Nevada on March 7 and continue through ten race venues for a total of fifteen rounds, ending with a return to Vegas for the season closer. Cities on the circuit will include Toronto, San Diego, Los Angeles, Detroit, Indianapolis and Tampa/St. Petersburg, Fla. One additional city will be announced, which SST founder and president Robby Gordon, believes will be the headline event of the 2014 season.

Races this year will be on an enhanced television schedule for more coverage and will likely continue following the IndyCar circuit as it did in 2013.

Gordon says that he came up with the idea for SST after his time racing in the Stadium Off-Road Racing Series with race legend Mickey Thompson. He wanted to create something just as spectacular, but on a larger scale. Trucks seemed to be the key and when sponsor SPEED Energy signed on, the idea was a go and Stadium Super Trucks was born.

Having watched many of the races in the series this year, I can say it's an exciting venue and great event with on- and off-road components and each stadium setup being different from the last, requiring the drivers to learn the track and adapt to changes. This figures heavily into the winners and losers, wrecks and clean runs as well. The massive amounts of time spend in the air, 20 and more feet off the ground, doesn't hurt either.

Looking forward to a 2014 season of SST? Tell us who you think will take the championship this year.