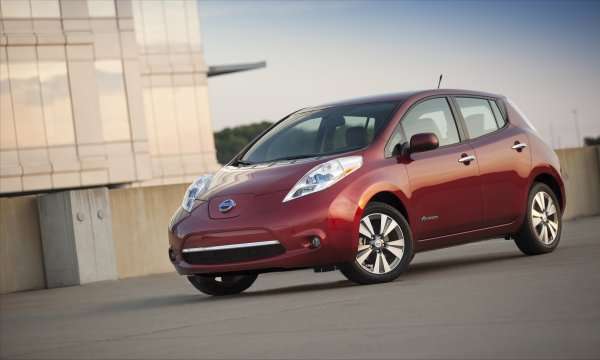 The 2014 Nissan LEAF is now in dealerships and all three trim packages come with new standard features that build on the value package Nissan has been promoting as the all-electric LEAF.
Advertisement

The 2014 Nissan LEAF has hit dealerships nationally and has a starting manufacturer's suggested retail price (MSRP) of $28,980 before incentives and destination and handling. There are three trim levels plus option packages as well as some added standard options for all models.

Rearview Monitor, which was previously available only as part of the Charge Package, is now standard on all Nissan LEAF models for the 2014 model year. Driving range is still 84 miles and MPGe ratings remain 126 in the city and 101 on the highway for a 114 MPGe combined.

The powertrain has not been changed and is still comprised of 48 power modules in the lithium-ion battery pack powering an 80kW AC synchronous motor (107 hp, 187 lb-ft). Charging can be done in five hours with the included 6.6kW onboard charger and a 220V outlet or eight hours with the 3.6kW charger (S-grade). The battery pack still includes an 8 year, 100,000 mile warranty.

The 2014 Nissan LEAF is assembled at the Smyrna, Tennessee plant with batteries being assembled on-site in the largest lithium-ion automotive battery plant in the U.S.