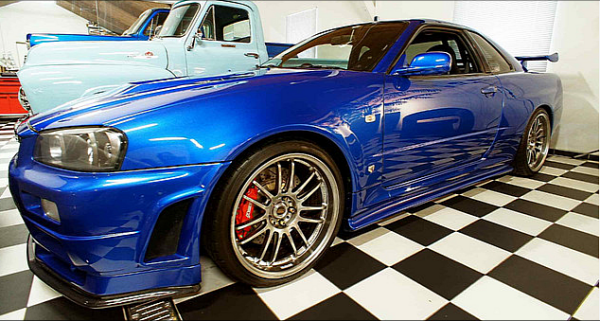 About a year ago, a German restoration firm put the GT-R used by Paul Walker in the Fast and Furious films up for sale just a couple of weeks after his death. Not getting the sale they wanted, they're at it again.
Advertisement

The anniversary of actor Paul Walker's death late last month was honored by friends, family and fans in remembrance of the Hollywood star's life and good works. It was also remembered by a German firm which owns the only known legitimate Nissan Skyline GT-R used in the films. They are attempting to sell the car for somewhere in the $1 to $6 million dollar range.

Having posted the advertisement and specifications for the car last year, the firm, GT-A, has not apparently received any offers they're willing to accept. Cashing in on the anniversary publicity, though, they've re-issued their offer to sell the car to an interested buyer. Now they have an appraisal from an accredited company saying that the car is worth up to 5 million Euros (roughly $6.1 million U.S.).

We talked about this last year, speculating as to whether the Skyline GT-R's surfacing was a hoax, but it appears to have been completely on the up and up.

Fans of the Fast and Furious franchise will remember the car well. There were only two Skyline GT-R 34 models used in the fourth installment of the Furious film series, one of which was reportedly stolen. The other, this one (it seems), was the more robust of the two and the only one in the film that was fully decked out underneath the bodywork for actual performance. Several additions to the car, detailed in the sales proposal on the GT-A website, make this a serious supercar.

Most of the other cars appearing as GT-Rs in the films were doubles, mocked up using old Volkswagen Beetle frames and GT-R bodywork knockoffs. All of those were reported destroyed during the film's production.

The sales page for the car can be seen here and features a video showcasing the car, which we've added below.

ElementKX wrote on December 5, 2014 - 2:54pm Permalink
I love this car, but even if I was filthy rich, there is no way in hizzell I pay over a mil for this car. Get real.