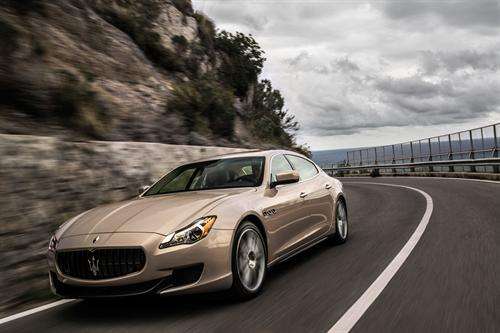 Maserati has officially released powertrain and other impressive details for the sixth-generation Quattroporte, expected to enter showrooms for 2014. A perfect mix of power, luxury, and technology.
Advertisement

When people think of Maserati, they usually think of the company's flagship saloon, the Quattroporte. Since its introduction in 1963, the Quattroporte has been the benchmark to which others have striven. Now, Maserati has released full details on the upcoming sixth-generation of the globally acclaimed sloop, which will incorporate a host of new technologies without losing sight of its roots.

Two things have usually set the Quattroporte apart from other high-end luxury sedans: it's powerful performance and its large cabin working together in a perfect 50:50 balance. The new Maserati Quattroporte promises to keep that tradition, adding even more power while becoming the most fuel efficient Quattroporte ever produced.

The long, powerful nose of the model line is still there, accommodating the huge V8 engine from Ferrari that resides beneath. The first thing observers will notice is that the signature concave Trident grille of the Quattroporte remains on this next generation. As do the clean lines and sloping, saloon build. Subtle updates show you that this is a new car, however, driving forward from the old. The headlights are slightly more cat-like, the roofline a touch more aggressive, and the door panels evoke a smooth, frameless, gliding appearance. The line beginning at the top of the front fender well flows along the sides, over the rear quarter, to the top of the tail lamps, reminding us of where this car came from.

Early this week, information was leaked on the new powertrains to be incorporated in the Quattroporte. That leak was largely correct, pointing to a V8 powerhouse to be offered thanks to Maserati engineers and Ferrari manufacture - as well as a smaller, but related V6 with better economy.

Twin Turbo Performance
The flagship 3.8-liter V8 sports 20% lower emissions from the last-generation at nearly a full liter smaller than the current Sport GT S, but its twin turbos mean 18% more power and 39% more torque at a massive 530 horsepower at 6,800 RPM and 650Nm at 2,000-4,000 RPM. Amazingly, those huge numbers can be overboosted to an astonishing 710Nm at 2,250-3,500 RPM. This plus the new Quattroporte's lighter weight means a power-to-weight ratio of 3.6kg per horsepower - the best in its class. It also means a 0-100km/h (0-62 MPH) of only 4.7 seconds, beating the previous Sport GT S by three tenths and the current 4.7L Quattroporte by almost a full second. Top speed is 191 MPH, making it the fastest four-door Maserati in history.

The engine accomplishes all of this through a pair of low-inertia, twin scroll parallel turbos with independent intercoolers as well as high-tumble cylinder heads with four cam phasers. All of this is fueled by a 200 bar direct fuel-injection system. Other changes include a variable displacement, electrically-controlled oil pump, a computer-controlled alternator that varies output by workload requirement, and a multi-mode driver control (both Normal and Sport, which can be automated or made manual through shift paddles).

Optional from the big V8 is a smaller, but very technologically-related V6 Twin Turbo. The engines share several core components, with the smaller V6 offering a no-less amazing 410 HP at 5,500 RPM and 550Nm of torque at 1,500-5,000 RPM. Bore and combustion chamber design are identical, as are the twin turbocharging set and the direct injection system. The V6, however, delivers maximum torque and max RPM sooner than the V8, meaning it has a higher torque at 183Nm per liter. The smaller engine also means a somewhat lighter car, allowing a top speed of 176 MPH and a 0-62 MPH rating equal to the outgoing Sport GT S.

The V8 will come standard as all-wheel drive while the V6 will be rear-wheel with AWD as an option. Both engine options, of course, will include teh Quattroporte's signature exhaust system tuned to give a comfortably subtle, reassuring sound in Normal mode and opening up to give the signature growl of the Maserati when in Sport mode.

A mechanical limited-slip differential engages at 35% lockup under power and 45% under release while the AWD option sports a system capable of full powertrain control, shifting from full rear to split axles (50:50) or anywhere in-between in 150 milliseconds.

Body, Chassis and Suspension
Maserati has moved towards a much more aluminum-centric chassis with steel and alloy safety cage framing surrounded by an aluminum sub-frame and reinforced cross-strut. The bulk of the Quattroporte's body is aluminum as well, maximizing safety while minimizing weight. All four doors, the hood and the deck are aluminum. Other materials including ultra-light weight magnesium are also utilized in the car's design.

This gives the 2014 Quattroporte a drag coefficient of 0.31, a 12% improvement over the outgoing generation, and an amazing 24% reduction in lift. This means not only better fuel consumption figures, but increased high-speed stability. Hidden items like a NACA duct to cool the differential without increasing drag and rear suspension arm flaps to channel airflow help account for most of these gains.

The traditional and highly-responsive double wishbone suspension of Maserati are still present on this new Quattroporte, but new technologies have been added to augment this tried-and-true design. High-mounted, all-aluminum double wishbones guarantee light and precise handling at the front suspension, including aluminum shock towers, upper and lower control arms, and uprights. At the rear is a five-bar multi-link system using, again, aluminum suspension arms. All the way around are Skyhook dampers.

Steering is through an all-new aluminum steering box developed specifically for the new Quattroporte. It allows adjustable sensitivity and a reduced steering ratio for better agility. All of this is powered with an elegant servo-powered hydraulic system that can be precisely controlled to reduce or enhance power assistance according to real-time need or driving mode selection. This allows far more road feedback to the driver than is the norm with traditional hydraulic or electric assist steering.

Brakes, Wheels and Tires
Brembo continues its partnership with Maserati on this new Quattroporte. Fixed-caliper braking technology is fitted to all models with the V8 having 380mm x 34mm (front) and 350mm x 28mm (rear) ventilated discs and six-piston alloy calipers. On the V6 model, 360mm x 32mm (front) and 350mm x 28mm (rear) discs and the same six-piston alloy calipers are used. The brakes are standard hydraulics, but also incorporate electronic controls for not only the parking brake, but also the hill start assist, both of which operate on all four wheels. In an emergency, the parking brake can be engaged at speed and will automatically reduce speed by 0.5g until released or the vehicle stops.

All of this beautiful Maserati design rides on standard 20-inch rims (19- or 21-inch rims available), crafted from flow-formed alloys to reduce core thickness and weight. Standard 245/40 front tires and 285/34 rear tires are fitted to the wheels to balance comfort and sport handling (245/45 and 275/40 or 245/35 and 285/30 on 19- and 21-inch respectively). Tire pressure monitoring is not only built-in with the valves, but actual pressure in real-time can be accessed via the dashboard display, allowing the driver to check without getting out of the car.

Top-end safety equipment including a six-airbag system, integrated safety seating with active headrests, and three-point seatbelts with load-limiting, pyrotechnic pre-tensioners are all present in this luxury saloon. A color rear-view camera is standard equipment, as are standard parking sensors and accoustic warning systems.

Active cruise control is standard as well, automatically changing speeds to adjust to traffic around the car when engaged.

Interior
A longer wheelbase means that this new Quattroporte has much more interior room than before, especially in the rear seats. More shoulder room for everyone and an increased luggage capacity are also a part of this redesign. In front, access to the new Maserati Touch Control (MTC) system, significantly upgraded from the previous option, is standard with an 8.4" Touch Screen. Controls most-often accessed are also mounted on the steering wheel.

The Fine Print
Interior and exterior color options have not been detailed, though publicity stills (see attached gallery) show at least three exterior options (possibly four) and two interior. Price points have not been released and likely will not be until later next year. The car itself will physically debut at the upcoming Detroit Auto Show.